People Are Unwittingly Turning Their Homes Into “Big Brother Houses”

With the advent of cheap home-surveillance cameras, combined with an absence of understanding of information hygiene, millions of people are unwittingly turning their homes into Big Brother houses.

There are many nice consumer-grade net cameras (netcams) available now. They allow for an easy set-up to record any unsolicited intrusion into your home, to deter burglars and similar. Most, if not all, of them are sold with the promise of hassle-free setup: “When the camera detects motion, images from your home is automatically sent to an app on your phone so you can… [random marketing words of warm fuzzy feeling].”

This, exactly at this point, is where alarm bells should be going off in everybody’s head. Red flares. Klaxons. Air raid-level warnings.

So images from the camera you just bought are leaving your home network.

So the camera is not under your control, as designed.

So you’re providing a live video feed to somewhere, and that somewhere gets to send you images of your own home to your phone. This means that everything that happens in your home can be seen by somebody else, and since those images have already left your control, you have absolutely no idea who else is also given permission to see a live feed directly into your home. You just turned your home into a “Big Brother” house. 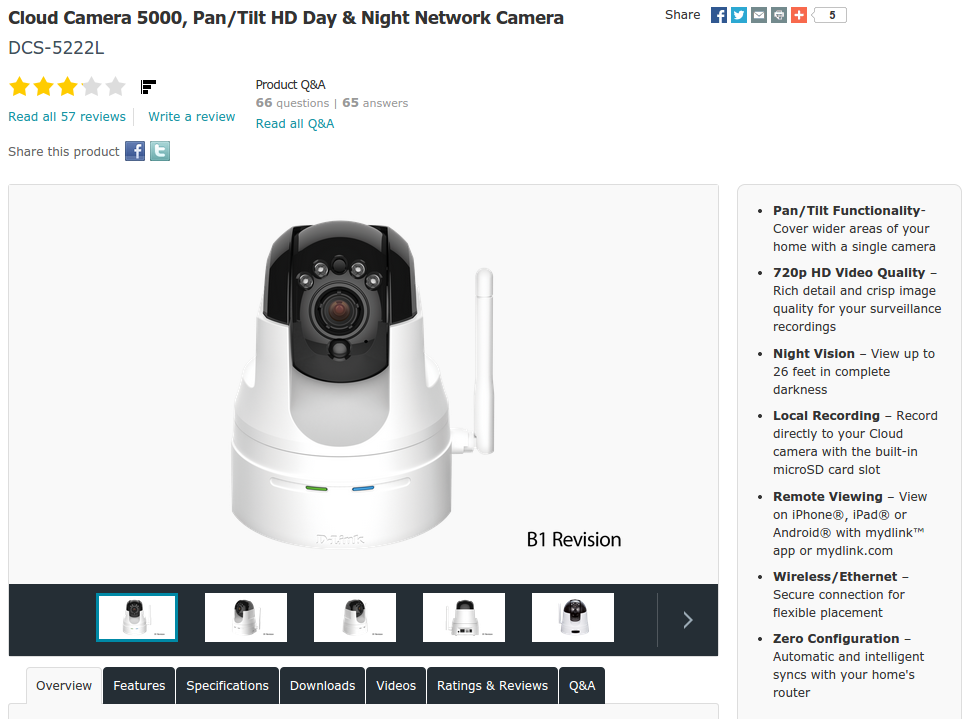 “Remote Viewing: View on iPhone, iPad or Android with mydlink app or mydlink.com”

Most people are completely oblivious of the concept of information hygiene – awareness of which information travels where, and therefore, who can see, access, store, and share that information. Some have approached me to say how convenient it is that they can see live video feeds from their home, or from a room in their home, directly in an app on their phone.

Who else can watch the feed from this surveillance camera in your home?, I ask them.

They typically don’t understand the question.

It’s not the camera that provides this feed to your phone. The camera is not capable of that, unless you programmed it with your phone number, which you didn’t. It’s a company that accesses your camera and sends these images from your camera to your phone. Who at that company can also watch your camera’s video feed?, I ask.

At this point you can usually see people’s faces go blank as they’re confronted with something they didn’t consider. Some start to pale a little – you can see them mentally rewinding and replaying everything that happened in view of that camera.

And as a follow-up question, whom is that company giving permission to look into your home in their turn? It might not be consensual. For example, is it possible that the government is forcing that company to provide them with a feed?

At this point, people typically shake their heads. No, the government would never do that. No, no, and a thousand nopes.

Are you sure? Do you even know which government the company is operating under?

Somewhere around this point, the scale of the problem starts to become apparent in the discussion.

It’s not just cameras. The Indiegogo project “Goji Smart Lock” has a similar gotcha. It’s supposed to be a lock to your house which opens by smartphone and where you can issue time-limited, personalized keys, the works. Everything sounds perfect and really innovative with this house lock, until you read this line:

“With Goji, you will never be locked out of your home. We have customer service representatives available 24/7 to help you lock or unlock your home remotely in case something happens to your phone …”

…at which point anybody aware of information hygiene realizes that this “lock” is under the manufacturer’s control and not yours, which by definition makes it not a lock at all. The worst part about it is that it’s supposed to be a feature that you’re not the one in ultimate control of access to your own home, just like it’s supposed to be a feature that the company selling cameras for your home are also able to watch them for you.