For first time, an ISP reveals why Police demand internet subscriber identities: ordinary file sharing is the most investigated “crime”

While the Police complain about shortage of resources, it turns out the most investigated “crime” on the net is ordinary people sharing music and movies with each other. This is in stark constrast to the everyday area person’s perception of justice, where the distribution monopoly laws command considerably less respect than even speed limits[1]. According to the ISP, the Police are provably spending expensive resources on pointless petty trifles.

For the first time, an ISP publishes statistics of what crimes the Police are investigating when requesting the release of internet subscriber identities. The so-called Data Retention, which is a governmental requirement to store data about everybody’s communications in order to use it against them in the future, was originally justified as necessary for fighting organized crime and terrorism – but is now being used against ordinary sharing of music and movies, according to the ISP.

“We want to publish these statistics in order to show the Police are violating people’s privacy and spending resources on pointless trifles”, says Jon Karlung, CEO of Bahnhof. 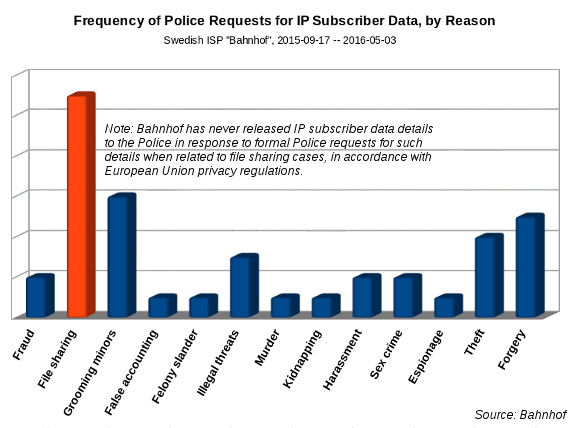 “We can also tell that these requests originate from many different places within the police force”, Karlung continues. “We’ve noted fifty different personal mail accounts sending requests, and five different group addresses, and even six requests over fax.”

Bahnhof notes that file sharing is by far the most requested type of “crime” leading the Police to request a release of subscriber identities.

However, the Bahnhof ISP has been die hard about privacy, and pointed at European privacy regulations, never releasing such data for crimes considered “non-serious”, typically meaning crimes carrying fines or less than six months in prison. Therefore, Bahnhof has just refused to release identities of allegedly-file-sharing subscribers, against the instructions of both Police and the Swedish Telecoms Authority. This behavior of Bahnhof’s is currently making its way through the courts, expected to end at the European Court of Justice, which is the court that established the privacy safeguards in the first place.

It’s particularly noteworthy that the Police has by far the most requests for ordinary file sharing to this ISP, despite this ISP never releasing such data for ordinary file sharing – you would assume the Police capable of learning. One would then speculate about the frequency with less-conscious ISPs, assuming it to be higher. Sadly, the vast majority of ISPs are not ready to take their country’s police to the European Court of Justice over privacy fundamentals.

So the Police are prioritizing investigations against commercial distribution monopoly violations over pretty much all other crime, and are sending requests per fax. You cannot get a more descriptive picture of the legal digital divide.

Disclosure: the author is a consumer-class broadband customer with this particular ISP.