Apple has been awarded a patent for making your camera refuse to record what it’s seeing if it also sees something akin to an infrared strobe light. The intention is to prevent recording concerts, but once the technology exists, it will also be used by authorities who don’t want police violence and abuse of power documented by members of the public.

It's fascinating how some industry players keep eroding the property rights that are not just vital to the economy, but to the notion of running the software we want, in the way we want, on the hardware we own. If it weren't for owning hardware, free software – including cryptography and anonymization – would not work, as Hollywood would own your hardware, something they have tried for decades. We would not have VPNs, we would not have Tor, we would not have strong encryption. We would basically just have pay-as-you-go Disney Channel.

It's this game Apple is playing with its latest invention, which uses something akin to an infrared strobe light – apparently, not unlike the devices that give emergency vehicles green lights at intersections – to prevent a mobile phone from recording what it sees. The idea is to prevent people from recording concerts – from using their own hardware to run the software they want on it, in violation of the Zeroeth Principle of Free Software. 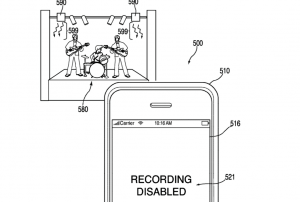 However, it doesn’t take a rocket scientist to realize that there are a lot of legitimate uses for filming with a mobile camera where the subject does not want to be filmed. Most of them have to do with accountability of some kind. And now, if this technology is implemented, Apple is giving all those people a way to prevent being documented abusing their power – sometimes abusing their power violently.

Journalism, by definition, is publishing something that somebody doesn’t want to be published. Everything else is just PR.

It’s going to take at most three months before Chinese-manufactured belt-clip devices would be available that mimicked this infrared strobery, and therefore shut down any and all cameras seeing them in frame. At this point, police officers who do not want to be filmed by the public – as police unions have argued time and again they don’t want to be filmed – will have a way to override cameras pointed at them, merely by wearing a discreet device on their belt. This is a step twenty years backward in accountability and freedom of information.