With the information disarray coming out of Turkey during the (seemingly failed) military coup, we see the same pattern of attempting to control media as we’ve seen for the past 500 years, in peacetime and wartime. Revolutions come quickly or slowly, violently or peacefully, but they still follow the same pattern of attempting to control and distort the truth – only the technology differs over 500 years.

The pattern is that the people in power rally to centralized information chokepoints to cut off and control the information flow and deny broadcasting ability to others, whereas the challengers use the power of lots and lots of volunteers to build a decentralized information flow around these chokepoints. When this succeeds, the challengers generally win. This has been repeated in coup d’état situations with the printing press, with pamphlets, with newspapers, and now, with the Internet and with social media. It’s also been used in more-or-less democratic settings where an establishment collectively tried to stonewall a challenger, as early as a century ago.

Some would argue it’s ironic that Turkish ruler Erdoğan used social media last night to call for people to rally against the coup. On the contrary, this is completely in line with the idea that all media should be strictly controlled by a few people in power. Erdoğan used social media to broadcast his own messages, which doesn’t contradict the previous actions of limiting the same ability for everybody else. It’s perfectly in line with actions of historical autocratic rulers to disable Facebook and Twitter, except for use by the ruler.

Let’s look at some of these patterns.

The printing press and the religious wars in the 1500s

Before the printing press was invented in 1453 by Gutenberg, the Catholic Church was the chokepoint of knowledge in Europe. It produced all the written knowledge in its monasteries, and anything circumventing that chokepoint had to rely on inefficient oral tradition and transmission – people telling each other across generations and across distance, essentially playing Telephone. The Church also wrote all its knowledge in Latin, which wasn’t readily accessible by the common folk, and so even needed the local preachers to translate the knowledge into the local language.

The printing press wasn’t as much a new invention, as it was the extremely successful combination of four other inventions: movable metal type, cheap clothrag-based paper, oil-based inks, and the squeeze press; along with a few auxiliary inventions, like the Gutenberg hand mould that allowed for rapid fabrication of metal movable type and therefore profitability.

Paradoxically, Gutenberg was convinced the press would strengthen the Church, as it would reduce copying errors between Bibles significantly – all books would indeed be identical. The result was the exact opposite, much thanks to the footwork of one Martin Luther, who objected to some abuses of power by the Church – abuses enabled by their chokepoint on information and media at the time. Specifically, they were selling salvation to raise funds, something that wasn’t in the books – and being a clergyman, Luther knew this and objected to it.

The objection of this one man sparked a century of civil war across the known world at the time – loosely described as the years 1524-1648. In particular, it was triggered by the Luther Bibles, where Luther printed bibles in German and French, and distributed them by the cartload — instantly revoking the media chokepoint previously held by the Catholic Church, an action that upset the power balance so much it led to a century of brutal warfare.

In this century, we can see a large selection of rulers trying an assortment of actions against challengers to power, and they are all directed at controlling the idea-distributing technology, rather than providing superior ideas. In this, the Church and the Crown often worked in tandem to defend their interests against the dangerous new technology.

In 1526, the Swedish king Gustav Vasa founded the Sweden Royal Printing (kungliga tryckeriet), which had an absolute monopoly printing anything and everything. No other print shops were allowed, at all. In this way, the Crown could control which ideas could be disseminated rapidly. It was moderately successful.

France, meanwhile, was not so successful. It tried to eliminate the technology altogether, gradually ratcheting up penalties for using any of the new technology until on January 13, 1535, the penalty for using a printing press hit death penalty by hanging. The official justification, which can still be found in the legislation logs, was that this drastic measure was necessary “to prevent the spread of dangerous ideas”, phrased as “falsehoods” and/or “harmful information”. This measure didn’t work at all – once the common people had tasted the knowledge of reading, there was no unlearning that experience, and bookshops outlined La France like a pearl necklace, with books of all flavors flowing in through her borders.

Arguably, the most successful preventer of new ideas of this time was Queen Mary I of England, who – despite having a short reign between 1553 and 1558 – created a commercial unholy alliance between the Printer’s Guild (the “London Company of Stationers“) and the Crown: In exchange for a commercial monopoly on printing, the Crown’s censors would receive the ability to inspect all pieces before printing. This monopoly was created on May 4, 1557, and although amended and revised, it remains to this day – we know it as Copyright, which was a term originally used only within the London Company of Stationers. Queen Mary I used this mechanism successfully to persecute political and religious dissidents, something that later earned her the ekename Bloody Mary.

After all rulers had fought the printing press with varying success, let’s go back to France which was arguably the least successful. In 1789, on July 14, the common people stormed the prison where political prisoners were being held, which was the starting point of the French Revolution — something other nobility and royalty deeply feared could happen to their countries, too. Robert Darnton, a professor of history with focus on information history said of the French Revolution,

The revolution tore [the slow patchwork of the Old Regime] to bits, and out of the rubble rebuilt something new – the French nation. The printing press was the crucial instrument in this process. Without the press, the revolution was impossible and unthinkable.

In this era, newspapers had started to take hold in England and elsewhere (originally from Venice), but were subject to prepublication censorship as mandated by the laws we know today as Copyright. An overreach by authorities in trying to seize printed material under this copyright regime led to the enormously important English case of Entick vs Carrington in 1765, which established in Common Law that authorities have no power which is not expressly given to them in law. Thus, this case expanded the Roman principle of Nulla poena sine lege (everything not forbidden is allowed for the common citizen) with its important addition that any executive power not explicitly given to authorites is forbidden by law. This important principle followed to the founding of the United States a few decades later and the drafting of its Constitution, and shows how eager authorities were to overreach in order to control the flow of information – like in France in 1535, to prevent somebody else from presenting their version of events.

Others moved ahead trying to create freedom of information as something positive. In 1766, Sweden and Finland, created one of the world’s first constitutions guaranteeing freedom of the press from pre-publication censorship, although the king still retained the right to revoke publication licenses after the fact.

As European countries gradually moved to more and more inclusive forms of democracy, some parts of the establishment refused to give challengers access to the chokepoints of information – which, at the time, were the newspaper print shops. Taking Sweden as an example again, the nascent Social Democratic party – similar to Labor in the UK, and without any equivalent in the US – were refused business at every print shop in the country in the early 1900s. The establishment held the chokepoints. Instead, activists had their newspapers printed in neighboring Denmark, took them across the narrow strait to Sweden by rowboat, and distributed them by volunteer network – circumventing the chokepoint. (While this is hardly a coup d’état as such, it’s still about an establishment being unseated from power, and so, the dynamics at play are similar enough to learn a lot.)

In this, the establishment had identified a new centralized chokepoint – the rail network – which the challengers could be denied access. And in response, the challengers again formed a distributed volunteer network to circumvent the chokepoint entirely.

This singular episode – an establishment questionably circumventing its constitution in conjuring weird legislation out of thin air in order to prevent challengers to reach potential sympathizers – has many, many equivalents in modern days.

The very same mechanisms remain to this day, even though the Internet has replaced the printing press. The social dynamics around power in society has not changed one bit in the last 500 years.

A good example would be the Arab Spring a couple of years ago, when activists united across borders to accomplish a lot. As social unrest went on the rise in Egypt catalyzed by social media and organizing over the net, the then-president Mubarak used the fact that there were only a few ISPs in the entire country to shut them all down, having identified an information chokepoint. 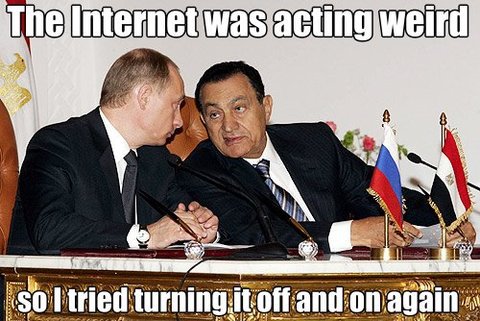 When this happened, activists all over the world sprang into action, putting up old analog modem pools that people in Egypt could call directly using old phone-line modems. In this way, a distributed effort circumvented the media chokepoint and let the people distribute information widely, against the desires of the people in power.

There’s also an interesting detail about all the photos of the protests from this time. As pointed out by Slim Amamou, who was briefly Secretary of State in Tunisia: taking pictures of the protests like this was highly illegal and dangerous, but everybody did it anyway to spread the word of what was happening. And there’s something else notable with these pictures: They contain other people doing the same thing. 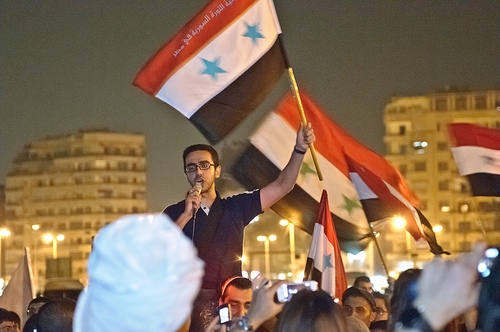 There really isn’t much new under the sun when it comes to establishments protecting their own power. The more you study information warfare through history, from Roman times and onward, the consistent observation is that people in power use that power to maintain and expand that power.

Right now, it’s not just our ability, but almost our duty to safeguard our liberty by routing our Internet traffic in ways that the powerholders don’t expect or want. A VPN is one such way. Running TOR consistently is another. Putting up a TOR exit node is helping others do so.

Remember, liberties are like muscles: they must be exercised regularly and in full, even to some degree of discomfort — or they will atrophy, wither, and die.