NSA: “We must know everything” – a reminder

The NSA has been out of the newsflow for a while, until some unknown hacker group decided to copy their tools and offer them for sale at one million bitcoin – a sum that’s basically fantasy and unobtainable, a sum that exchange rates can’t support in liquidity. Still, it’s a healthy reminder that the United States NSA is very much just as active, as healthy, and as malicious as it was when Snowden first presented proof of its toxic and arrogant behavior.

The story of the NSA, GCHQ, FRA, BND, and others is a peculiar one. Most governments will go diehard for these three goals:

Yes, seriously. A government will claim with a straight face that all these three goals are perfectly achievable at the same time. There is absolute-zero understanding that these three goals are completely mutually exclusive, and that they need transparent and clear prioritization between them at the highest level.

And because we need a reminder of what kind of beast the NSA still is, they actually built a room called the “Information Dominance Center” with huge screens in the shape of the bridge from the starship Enterprise, complete down to a futuristic and artificial “whoosh” sound from automatic doors as they open and close. All at taxpayers expense, all intended to violate your rights – and have gleeful fun while doing it. 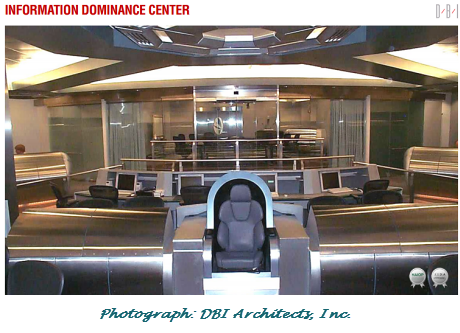 Photo from NSA’s Information Dominance Center. Photo via the architects, via Glenn Greenwald writing for the Guardian.

PBS writes of this particular room in a post that’s now offline;

“When he was running the Army’s Intelligence and Security Command, Alexander brought many of his future allies down to Fort Belvoir for a tour of his base of operations, a facility known as the Information Dominance Center. It had been designed by a Hollywood set designer to mimic the bridge of the starship Enterprise from Star Trek, complete with chrome panels, computer stations, a huge TV monitor on the forward wall, and doors that made a ‘whoosh’ sound when they slid open and closed. Lawmakers and other important officials took turns sitting in a leather ‘captain’s chair’ in the center of the room and watched as Alexander, a lover of science-fiction movies, showed off his data tools on the big screen.

“‘Everybody wanted to sit in the chair at least once to pretend he was Jean-Luc Picard,’ says a retired officer in charge of VIP visits.”

Seriously, somebody building a room like this just so they get to sit in that captain’s chair on taxpayer dollar is just a chronically-furious small white lapcat away from a perfect Bond villain.

What’s odd is how quickly this change in attitude came about after the end of the Cold War. During the 1970s and 1980s, when the nuclear tension between the Soviet and the West was at its peak, what pretty much defined the west was that we respected the liberty and privacy of our citizens. It was part of our very identity. We were not them, and they, that was the people who listened to their citizens’ every conversation. “Everything you say can and will be used against you”, kind of, except it’s really everything you say, at any time.

“So how do you feel about the government? Please speak clearly into the flower pot.”
— In Soviet Russia, The Flowers Look At You

Somehow, this attitude got embraced by the West wholeheartedly the moment the Cold War ended. How did that happen?

Oh and by the way, there’s just one final detail: the quote in the title, “We must know everything”, is not from the United States NSA. It’s from Erich Mielke, who built the East German Stasi – the Ministerium für Staatssicherheit, a name that just happens to translate to National Security Agency. (Well, lexically it’s State Security Ministry, but adapting the words for their meaning in US English, it becomes National Security Agency.)