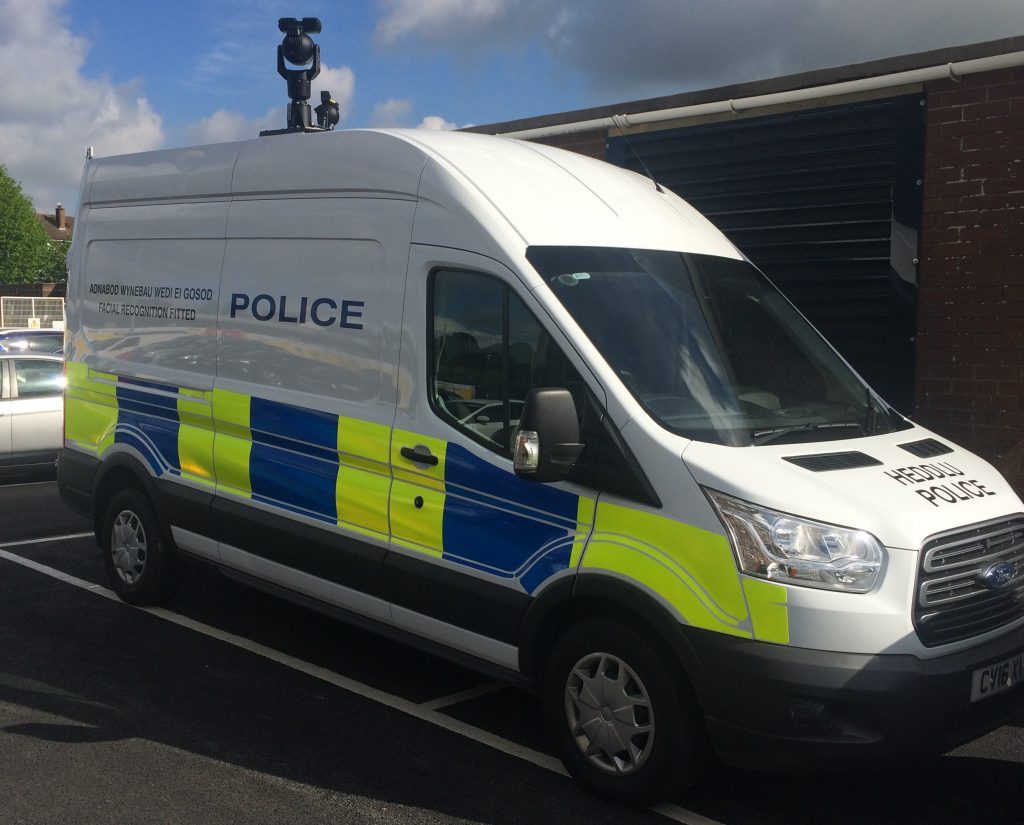 An automatic facial scanning system has been used in Wales to spot a man wanted by the UK police, who was then arrested. Believed to be the first of its kind in the country, the arrest follows an earlier announcement by the South Wales police force that that it would be introducing NEC’s NeoFace Watch automatic facial recognition system. Cameras are mounted on the roof of a police vehicle to allow surrounding crowds to be scanned for suspects in real time:

“This facial recognition technology will enable us to search, scan and monitor images and video of suspects against offender databases, leading to the faster and more accurate identification of persons of interest. The technology can also enhance our existing CCTV network in the future by extracting faces in real time and instantaneously matching them against a watch list of individuals, including missing people. We are very cognisant of concerns about privacy and we are building in checks and balances into our methodology to reassure the public that the approach we take is justified and proportionate.”

The UK is famous for having a very high number of CCTV cameras. At the beginning of 2015, there were six million of them, in a country whose population is 65 million – that is, one surveillance camera for every 10 people. So it’s no surprise the UK police are keen to harness automatic facial recognition systems to spot people they are seeking. An earlier trial of large-scale facial recognition took place during a music festival in 2015, when 100,000 visitors were scanned. Something similar had been carried out by the Boston police at a local music festival in the wake of the 2013 Boston marathon bombing.

The UK police are rolling out facial recognition to other surveillance systems. For example, the license plate of every car driving into London has been recorded and stored for some time. But the same cameras also capture images of the drivers, so automatic facial recognition allows the identities of many entering the city to be established.

It’s not just the police that are turning to such technology. A couple of years ago, the BBC reported on how a commercial CCTV system was being extended to include facial recognition to spot known shoplifters:

“Until now, Facewatch has provided local groups of businesses with a way to share their CCTV images of shoplifters and other potential offenders.

Although little remarked upon, the use of this technology seems to be widespread: a 2015 survey of 150 retail executives suggested that a quarter of all British shops use facial recognition systems in this way.

Perhaps the most serious threat to privacy from automatic facial recognition comes from the fact that people are taking and sharing so many images of themselves that it is easy to acquire them to create vast databases. Thanks to Edward Snowden, we know that the NSA has been doing that for a while, as the New York Times reported in 2014:

“The agency intercepts “millions of images per day” — including about 55,000 “facial recognition quality images” — which translate into “tremendous untapped potential,” according to 2011 documents obtained from the former agency contractor Edward J. Snowden. While once focused on written and oral communications, the N.S.A. now considers facial images, fingerprints and other identifiers just as important to its mission of tracking suspected terrorists and other intelligence targets, the documents show.

“It’s not just the traditional communications we’re after: It’s taking a full-arsenal approach that digitally exploits the clues a target leaves behind in their regular activities on the net to compile biographic and biometric information” that can help “implement precision targeting,” noted a 2010 document.”

Other Snowden documents published by the Guardian show that the UK’s GCHQ is also harvesting images of people, this time derived from webcam traffic:

“GCHQ files dating between 2008 and 2010 explicitly state that a surveillance program codenamed Optic Nerve collected still images of Yahoo webcam chats in bulk and saved them to agency databases, regardless of whether individual users were an intelligence target or not.

In one six-month period in 2008 alone, the agency collected webcam imagery – including substantial quantities of sexually explicit communications – from more than 1.8 million Yahoo user accounts globally.”

It’s not even necessary to resort to these clandestine methods in order to create huge databases – an option only available to national spy services with plentiful resources and extensive surveillance capabilities. Thanks to the widespread use of social media, there are now huge public stores of images and associated identities that can be harvested for automatic facial recognition services. Rick Falkvinge wrote about one last year called FindFace, later described by The Guardian as follows:

“It works by comparing photographs to profile pictures on Vkontakte, a social network popular in Russia and the former Soviet Union, with more than 200 million accounts. In future, the designers imagine a world where people walking past you on the street could find your social network profile by sneaking a photograph of you, and shops, advertisers and the police could pick your face out of crowds and track you down via social networks.”

As technology advances, and people post ever-more pictures of themselves and their friends online, so the success rate of being able to identify correctly a random face in the crowd will increase. As Rick rightly noted, four years ago, we are fast approaching the point where outside anonymity no longer exists. By then, arrests as a result of automatic face recognition systems scanning CCTV feeds everywhere to pick out faces in the crowd will have become routine, as will “predictive policing” that aims to spot people before they commit a crime.