Here come connected vehicles and urban analytics: what do they mean for privacy? 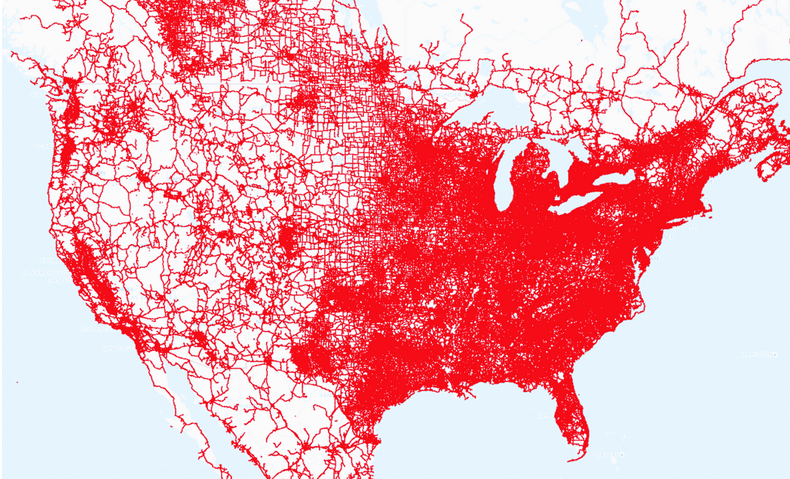 Electric vehicles and driverless cars may get the headlines, but the real revolution on roads is happening elsewhere, silently and out of sight. For twenty years, more and more digital technology has been added to vehicles. Today, they have almost become computers that have wheels and engines. That’s been made possible in part by the On-Board Diagnostic (OBB) standard, which has created a way for different digital components to communicate, and for control systems to monitor and coordinate operation.

Connected vehicles take the next step, by using wireless communications to link that on-board digital system with the outside world. One of the leading companies in this sector is Geotab, which has its headquarters in Canada. Its Geotab GO8 is a small unit that plugs into the OBD-II system to extract data and transmit it back to Geotab for analysis. The device collects and transmits detailed diagnostics from a multitude of sources, including the engine, the drivetrain, the instrument cluster and other subsystems. The data that is gathered is not just to monitor how the vehicle itself is operating. It can also be used to analyze the way people drive, and to provide real-time feedback to correct dangerous or unwanted practices:

A related feature is accident detection. If a suspected accident is detected, detailed data will be automatically uploaded from the device to allow for a “forensic reconstruction” of the event, and notification sent to managers by email or a desktop alert. Although undoubtedly useful in emergencies, this feature also means that connected cars effectively spy on their drivers.

A software and hardware marketplace for the Geotab GO8 adds to its functionality in various ways. But perhaps the most significant extension of the device’s reach is the move from single-vehicle diagnostics to what Geotab calls “urban analytics”. This is largely the same concept as the “smart city“, which Privacy News Online wrote about last year. The idea is that a wide range of sensor data is gathered on a city-wide basis to allow urban trends to be analyzed and resources managed in a more efficient way.

Done properly, that’s clearly a sensible idea. But installing a range of sensors citywide, and hooking them up to central monitoring systems entails considerable investment that may dissuade city managers from adopting or even investigating this new approach. Geotab’s connected vehicle systems are effectively multiple sensors on wheels; as they move around, they are constantly gathering much of the data that cities need for urban analytics. Geotab therefore offers its datastream to cities as a substitute for standalone sensors installed permanently on the streets. The Canadian company says that it processes over 2 billion data points per day:

This data is derived from over 1.1 billion miles of driving every month (the equivalent of 12 trips to the sun), and when combined with third-party peripherals and sensor-data, makes up one of the industry’s largest [Internet of Things] mobile sensor networks. Using advanced analytics and data science capabilities, Geotab applies artificial intelligence and machine learning techniques to enrich this aggregated data and deliver actionable insights. These insights can be used to infer road conditions, identify dangerous roadways and intersections, predict traffic patterns, and so much more.

Monitoring real-time traffic flow and locating accident hotspots in a city are natural applications of Geotab’s huge datasets. However, as a Geotab press release about a smart city collaboration with Columbus, Ohio, points out, data from sensors located in vehicles have an important advantage over traditional data-gathering systems:

Currently, city managers and planners are faced with the challenge of relying on incomplete or out of date information. In the initial use case, Columbus gives the example of how safety studies are typically based on recorded vehicle crashes but don’t include near-misses, which can provide more insight into hazardous areas on the road. Having this complementary data provides additional evidence for taking action and ultimately, could help reduce the number of crashes.

A less obvious application of Geotab’s dataset is the ability to spot problems like potholes. Aggregated vertical axis accelerometer data from vehicles can be analyzed in near real-time to indicate areas in need of road maintenance. Other aspects of urban life that can be monitored in this way include areas where cars idle, thus wasting fuel and increasing air pollution, and roads where drivers are searching for parking places. Gathering this kind of data would be expensive using other approaches, but emerges naturally from aggregated traffic flows.

Huge datasets generated by sensors on connected vehicles offer interesting new opportunities for urban analytics. But there are naturally privacy concerns, too. Connected vehicles inevitably track the people who drive them. Analyzing the habits of drivers as revealed by their journeys can expose extremely sensitive information – think of repeated visits to a hospital, or unexpected overnight stays at private houses.

Geotab is aware of this issue. In addition to a privacy section on its Web site, it also emphasizes that there is no use or disclosure of personal, customer or driver on data.geotab.com, its site which makes anonymized datasets about urban infrastructure, business demographics, and the weather freely available:

While datasets are derived from data that have a component of location associated with the datasets are structured to ensure that no individual location data is disclosed and each area must comprise data from multiple customers. For example, hazardous driving areas are aggregated to an area of 150 m by 150 m where at least 3 or more customers have experienced harsh braking events.

As sensors on connected cars become more sophisticated, and the data they provide more fine-grained, so the usefulness of that information will increase, and with it applications in everyday life. For example, insurance companies are already offering reduced premiums for those willing to install so-called “black box” systems in their vehicles. These are essentially specialized versions of the connected vehicle tracking devices discussed above, and contain similarly personal data. The danger is that what are undoubtedly useful systems that can improve our cities and save us money could also become yet another way to undermine our privacy.