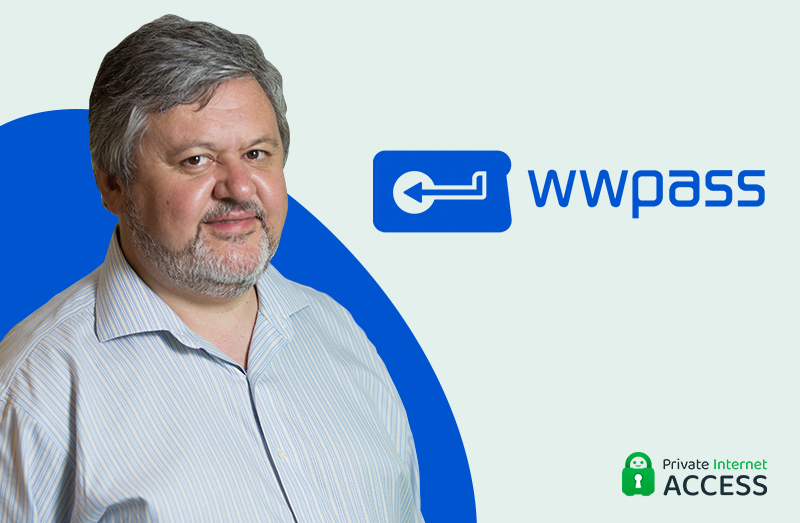 Private Internet Access recently interviewed Eugene Shablygin, CEO of WWPass. We asked him about his company’s information storage technology and how users can log in seamlessly without passwords.

Private Internet Access: What motivated you to start WWPass?

Eugene Shablygin: My background is in fundamental physics, but at some point, I realized I wasn’t really a good physicist. In my opinion, I was not on par with good physicists like Einstein, and I didn’t feel the essence of physics. However, I felt that I understood how data flows through different computers.

From the very beginning, I was working with computers as a tool to simplify my life as a physicist, and then I moved to computer science and then to computer business. At that time, in 2008, I was already running a relatively big company, which since then has grown at least tenfold, and is now a half-billion-dollar systems integrator.

I wanted to create some unique value—which is different from the values of other vendors—which we’re integrating and selling, and I felt that protection of information and privacy are a very important thing. To me, privacy protection is as important as the Second Amendment in the United States because it maintains the balance between individuals, government, and society.

Since governments are gaining more and more power over individuals, I felt that I needed to empower individuals with the tools that would help them be well-protected. At the same time, we see companies are getting attacked by bad actors who are stealing information about corporations, their customers, and their users. I thought that the same technology could be used by companies and even by governments to protect the freedom and information of individuals.

Along with a couple of my friends, we invented a number of tricks—how to make information more secure in networks, in the cloud, and in data centers—and that’s how we started. We patented our technology, we implemented it, and now we’re selling solutions based on these inventions.

PIA: What do you love about working in cybersecurity?

ES: It’s the area in IT that is developing the fastest. I like changes and new, complex developments. Some things are stable for centuries, and then for a decade or two, the world completely changes and people must adjust, and then the same technologies stay flat for another 100 years. Aviation, for example, grew from zero to something very substantial in about 15 years at the turn of the 20th century. Then it was stable in the ‘20s and ‘30s and even during World War II. Then it jumped again from the distant aircrafts of the World War II to the supersonic jets of 1950s. But since the 1950s, there has been no real fundamental progress in aviation.

I feel that cybersecurity is the part of the information technology field that is experiencing this kind of revolutionary transformation right now. We are changing the way the information is protected, and obviously, the bad guys are trying to steal it and they are usually ahead of the curve. Companies are trying to protect their information, and they are usually lagging, of course. But in short, it’s where the most interesting activity happens today.

PIA: What is your company’s flagship product?

ES: Our flagship product is our information storage technology. It’s very difficult to steal and mess with that, but it’s virtual and invisible to the rest of the world. What is visible is our login and authentication technology where you can integrate this underlying flagship technology into your solution. If you’re a bank, corporation, or web shop, you can integrate our technology and then let your users log in very easily, without usernames and passwords, which is well-known as the least reliable protection in cybersecurity and in information technology.

The visible part of this flagship product is the login with WWPass, and we also have a few products that are built on top of our module like a password manager called PassHub.net, which we initially developed for ourselves.  From a security perspective, it is one of the most secure password managers on the market today. It’s available both for individuals and corporations. A lot of websites still use usernames and passwords, and we tried to fight that. We’re trying to offer a much better solution to replace usernames and passwords but replacing a dominant design with something new usually takes time.  Another offering is our integration with the leading identity and access management companies (Auth0, Okta, Gluu, Key Cloack, and others).

PIA: Why do you think individuals and companies need a good VPN?

ES: It’s an essential tool for everybody. They protect the workplace and companies, which are interconnected across the globe, the VPN is an absolutely essential technology.

There are two types of VPN: a VPN used by companies to interconnect their sites, and VPNs where individuals log into different corporate systems. They’re equally important. Rephrasing a well-known motto, “Don’t leave home without it.” If you are not on the VPN when you are outside of your office, you are under great risk.

The leading VPNs are all integrated with WWPass technology, which allows users to securely access a VPN without usernames and passwords.   When I, for example, log into my corporate VPN, I just scan a dynamic QR code. Nobody else can get into it because they don’t have the underlying WWPass system, and when I log into my home network, I also use VPN and log in with my WWPass Key app.

PIA: What do you think are the worst cyberthreats out there today?

ES: I believe the worst cyberthreat is ignorance. A lot of people still believe that nothing is going to happen to them, and that’s the most dangerous thing because the probability of being hacked or being the victim of cybercrime is very high. That’s probably the biggest risk for both companies and individuals. Unfortunately, bad actors are usually ahead of defense technologies and are inventing new tricks to get through corporate defenses and cause a lot of harm. We already know about some lives lost because of the hacking, like when the hospital system was hacked, and the oxygen supply was cut. Because of this hack, somebody died.

But the big risk can be the destruction of some critical infrastructure units. If we look at the current reports, about 80% of all cybersecurity breaches happen because of the compromised credentials, and that’s exactly what we’re fighting and replacing with our technology. We are battling the highest risk in information technology today, and the biggest obstacle is ignorance. People just don’t pay attention.

PIA: How is the pandemic changing the way your company is dealing with cybersecurity?

ES: It really did not change a lot internally because our company was remote and dispersed worldwide from the very beginning. For example, we were one of the very first adopters of Zoom. When remote work started, it was absolutely nothing new for us. We kept working exactly the same way as we worked before.

With customer relations, there was a big impact because people were thinking about survival and not about protection from the beginning. Unfortunately, we had a very negative impact on our sales because the priority was shifted away from cyberdefense, especially compared to creating a remote work environment. But it also created a great opportunity for us because when a lot of companies created these remote workplaces, they did not pay enough attention to security, and it starts to cost them. So, companies now are turning back to cybersecurity, and we see the growth demand for our services and other cybersecurity services.

COVID explicitly showed how vulnerable society is, both from a medical perspective and from a cybersecurity perspective. COVID passports and paper QR codes, which are used in many countries, are extremely insecure and could be easily compromised.