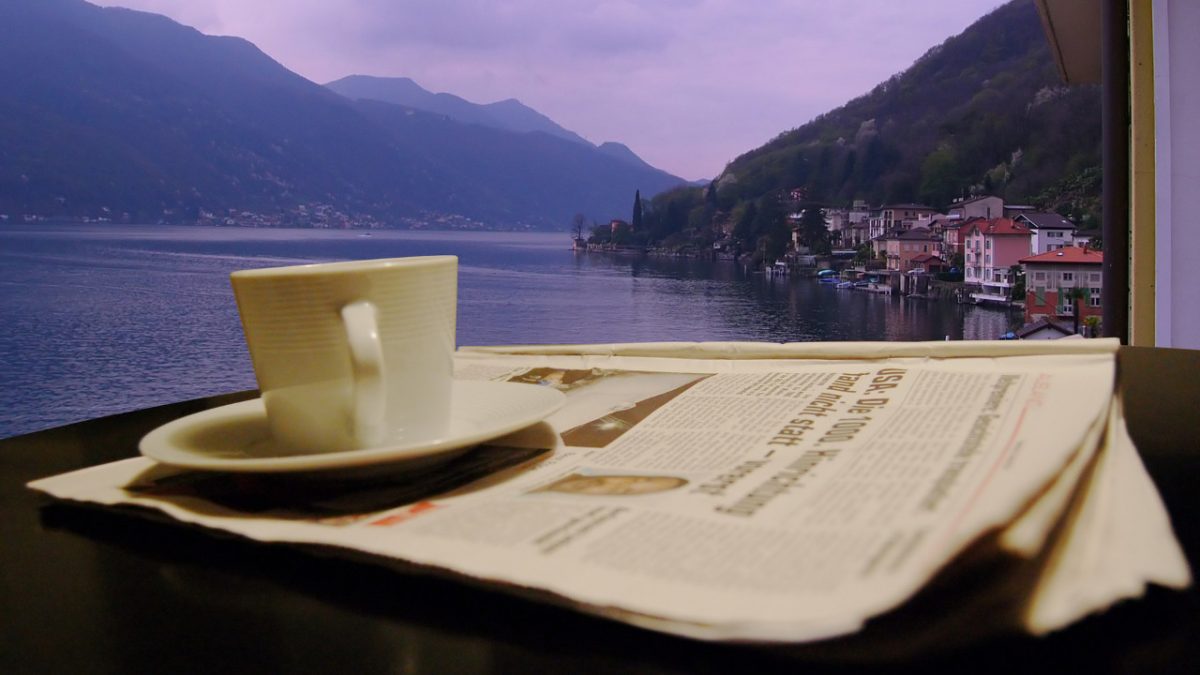 Fake news has always been around for humor purposes, but the real “fake news” scares happen when the establishment is so used to getting away with lying, that any alternate narrative is demonized as factually false, irresponsible, and dangerous.

“The Onion” was next to “The Economist” in the newspaper stands for almost two decades. “Weekly World News”, which one-ups most British tabloids with regular Elvis sightings and vivid descriptions of two-mile fish orbiting in the rings of Jupiter, is still next to “Foreign Policy” in the same newspaper stands. This was never considered problematic in the slightest. Why, then, is a unified establishment screaming bloody murder about “fake news” all of a sudden?

To see the pattern here, it helps to know a little history – let’s look at the great “Fake News” scare of 1530. It has a lot of elements similar to ours today.

“The statements that make [established] people mad are the ones they worry might be believed. […] If Galileo had said that people in Padua were ten feet tall, he would have been regarded as a harmless eccentric. Saying the earth orbited the sun was another matter. The church knew this would set people thinking.” — Paul Graham

After the Black Death hit Europe hard around 1350, the monasteries were chronically short on manpower. The families that had used to send a child or two to become monks or nuns simply needed all their kids to work in the fields, to ensure food production, before such luxuries as manning the monasteries could even be considered. Therefore, any work that required involving monasteries became increasingly steep or scarce for the coming century.

This is relevant as those monasteries were the only places that produced books, all of which were in Latin, and all of which were in complete synchronization with the messages of the Catholic Church, the owner of the monasteries and therefore the owner of all mass media at the time. To compound the situation, the same owner also employed all the news anchors – the village preachers, who were the ones who read the books (in Latin) and translated them to the common tongue in villages.

A book was hideously expensive to produce. Not only was each page copied by hand, but the pages were made from animal hides: it was estimated that a single book may require the hides of as much as 300 calves. We don’t have a lot of comparative numbers from Europe of the time, but we do have them from elsewhere: a fine book in the Islamic world of the time could cost 100 dinars, with the annual paycheck required to support a middle-class family being about 25 dinars. Put differently, the prospect of buying one single book would consume an entire family income for four years – or in the $500k to $1M range in today’s value.

Gutenberg was convinced his invention would strengthen the Church, as the ability to mass produce books from a single original would eliminate all the small copying errors invariably introduced in the manual book production process. It would therefore, he argued, improve the consistency of Christian bibles. The result was the exact opposite, through mechanisms Gutenberg did not foresee.

To the day, almost a century later, Johannes Gutenberg combined the four inventions of the squeeze press, oil-based inks, metal movable type, and cheap rag-based pages to produce the first printing press. All of a sudden, books could be mass produced cheaply, and there was an enormous profit motive to be made in producing books for the common people. You could accurately and shamelessly call it an undercutting of the monastery business. (“How will the monks get paid if we allow cheap copying technologies?”)

Gutenberg was convinced his invention would strengthen the Church, as the ability to mass produce books from a single original would eliminate all the small copying errors invariably introduced in the manual book production process. The result was the exact opposite, through mechanisms Gutenberg did not foresee.

It’s important to remember here, that through the media cartel of the medieval ages (where the Catholic Church produced all news and reported all news), that there was an absolute gatekeeper position over the narrative. The Church could essentially claim that something was true, and everybody would believe it. This is a very powerful position, being the gatekeeper of true and false – one that is prone to abuse without any opposition, or competition, in reporting. As it turned out, the Catholic Church would indeed come to abuse this power quite egregiously, and paid the price for it.

What Martin Luther protested was only superficially the selling of salvation to raise funds: fundamentally, he was objecting to abuse of the gatekeeper position over truth and lie for the gatekeeper’s material benefit.

In the late 1400s, the Catholic Church needed to raise money, and came up with the idea of selling forgiveness for sins, the basic idea being that you didn’t need to be a good person to gain the favor of the Church (and divine beings), you only needed to be Rich. A priest, monk, and theologist named Martin Luther took particular exception to this message, seeing how it stood in complete opposition to everything the Church was supposed to be about, and nailed his 95 theses to the church door in 1517.

These 95 theses outlined how the entire practice of selling divine forgiveness was based on falsehoods, fabrications, and fiction. However, it’s important to look at the bigger picture here: what Martin Luther protested was only superficially the selling of salvation to raise funds. More fundamentally, he was objecting to abuse of the gatekeeper position over truth and lie to twist the narrative for the gatekeeper’s material benefit.

This is where the story should start to feel familiar with modern day conflicts over the Power of Narrative.

Luther was excommunicated – banished, exiled – in 1521. This was one of the graver punishments administered, short of the death penalty, and the only thing remaining for somebody thus punished was normally to leave for foreign lands. However, in Luther’s case, he was given refuge in lands siding with him instead of the Catholic regime, ultimately setting off a century of civil war over the Power of Narrative.

The final death knell came when Luther published bibles in German and French using the new printing press, the so-called Luther Bibles, first published in 1522. These set off shockwaves, as they were 1) distributed by the cartload in the streets of Paris and France, 2) were readable by the common people without translation by the clergy, and 3) didn’t cost the equivalent of a million dollars each.

The Church immediately went into a panic, as they had instantly lost their gatekeeper position. No longer were they able to stand unchallenged when they were reading from the Bible in Latin, as people could – and would – verify the claims made, using their own direct sources. And as it turned out, a lot of the things that had been claimed – selling salvation among them – had been baloney of the highest order with no support in the Christian Bible as claimed.

The Catholic church went on a rampage and a crusade against this new spread of ideas that would challenge its narrative, and in particular, against the technology which enabled people to challenge its narrative. Copying books cheaply and efficiently instead of paying four annual salaries for a single book – the audacity, the outrageous heresy! How dared people copy books themselves without respecting the Church? Obviously, books could only be properly copied in monasteries, to ensure proper quality.

(“How will the monks copying books get paid otherwise?” was as much a smokescreen then as it is today.)

The church kept up the pressure against the printing press, as it saw all the resulting non-sanctioned news channels as completely fake, not just being wrong, but being dangerous. They were irresponsible. They were deliberately spreading misinformation – at least the Church saw it that way, a Church which was institutionally incapable of unlearning that it was no longer the single source of information and would no longer have whatever outlandish claim accepted without question.

However, the nobility and royalty of the time were certainly paying attention to the Church. After all, the Archbishop installed Kings, so there was a mutual dependence for power between the clergy and royalty at the time. Therefore, when the Church exclaimed the sky is falling (“there is fake news everywhere! We must do something!!!111!!one!”), the royalty tended to listen.

As a result, on January 13, 1535, the French King Francis I signed into law the death penalty by hanging for using a printing press at all. Yes, you read that right: there was a death penalty for making unauthorized copies. The justification for the law, as still readable in the preserved logs from 1535, was to “prevent the spread of misinformation and false news”.

So the gatekeepers of knowledge and culture in 1530, on losing their gatekeeper position over the narrative, didn’t counter with higher-quality reporting, but instead attacked the technology enabling competition, calling it out as spreading misinformation and irresponsible fake reports. Does any of this seem… familiar?

The law was a complete fiasco. Once people had learned to read competing reporting, there was no unlearning it. The law was repealed shortly thereafter. England went another route to prevent the success of the printing press by establishing a censorship regime with printing monopolies, known as copyright, but that’s a story for another day.

As a final touch, let’s consider the words of Paul Graham, in his excellent essay “what you can’t say”: “No one gets in trouble for saying that 2 + 2 is 5, or that people in Pittsburgh are ten feet tall. Such obviously false statements might be treated as jokes, or at worst as evidence of insanity, but they are not likely to make anyone mad. The statements that make people mad are the ones they worry might be believed. I suspect the statements that make people maddest are those they worry might be true. […] If Galileo had said that people in Padua were ten feet tall, he would have been regarded as a harmless eccentric. Saying the earth orbited the sun was another matter. The church knew this would set people thinking.”