The EU Wants 5G Phones on Airplanes — Will the US Follow Suit? 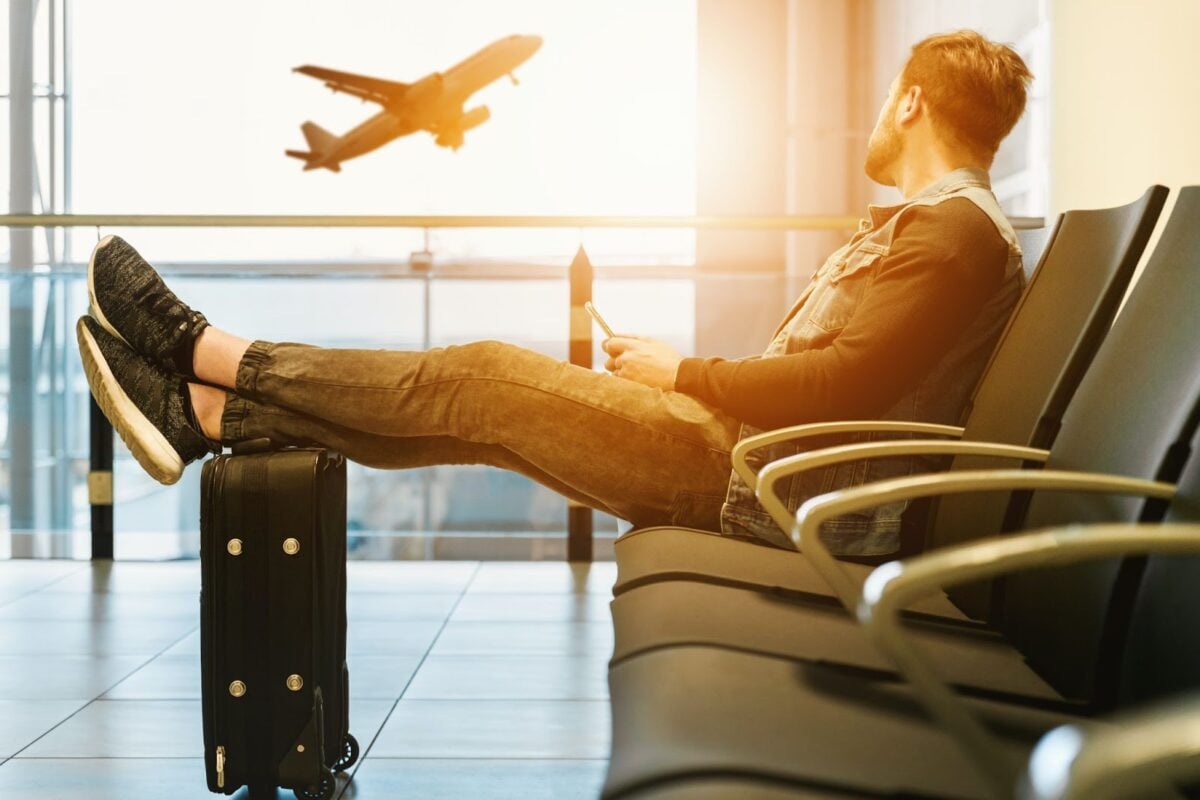 The times of staring out of the airplane window with a screaming baby as your only soundtrack are soon going to be a thing of the past. The European Commission decided it’s time to allow passengers to use 5G in airplane mode during flights. This means Netflix and Spotify won’t be out of bounds anymore — and you can keep your family up to date with your ETA.

This decision creates a huge division between aviation in Europe and the rest of the world, including the US. The latter is still dealing with repercussions after 5G transmitters halted or rerouted flights across the country, making it unlikely to follow in the EU’s footsteps. This poses a question: why can one continent safely implement 5G phones on planes while the other is struggling with cellular receivers on the ground? And is the move as “safe” as we’re led to believe?

The Real Reason Behind the Airplane Phone Ban
Picocells as the Onboard Network Connectors
Are 5G Phones Safe to Use on Airplanes?
Will the US Allow Phones on Airplanes?
It’s The End of Airplane Mode in the EU — What’s Next?
FAQ

The Real Reason Behind the Airplane Phone Ban

Pilots rely on the plane’s automation systems, especially in bad weather conditions, as altitude readings let them know when to get ready for touchdown. Altitude radars, called aviators, use radio frequencies similar to those sent by cellular networks to get their readings. This could cause potential interference and false results (at least in theory), so airlines had to ban the use of phones on planes — unless they’re in airplane mode.

Considering how enforced the phone ban is on all airlines, we still have very little proof to confirm whether phones actually interfere with aviators. Many aviation experts also argue you wouldn’t be allowed to take your mobile devices with you on board if they really posed a threat to the system. So it might be more of a precaution as people err on the side of caution.

However, it turns out airlines may have another reason for banning phones. Imagine being stuck 10,000ft in the air with 200 people loudly chatting on the phone at the same time. Even 30 minutes of it would put you at your wit’s end. So airlines avoid unnecessary arguments and complaints by making sure you don’t use your phone on a plane for anything other than your personal entertainment.

Picocells as the Onboard Network Connectors

In order to implement the new decision, European airlines will equip their aircraft with picocells. These are essentially small cellular base stations, which send and receive short-range, low-power signals. Picocells connect to satellite networks or mobile network stations, which then enables further communication on your phone allowing easy calls and data exchange.

Since picocells are small, they aren’t prepared to handle too many users at the same time. At the moment, guidelines show they can only provide mobile connections to about 100 passengers at a time. This means we’ll likely see new in-flight rules which control who can access 5G on airlines in Europe and for how long. It’s also very possible that connecting to a plane’s picocell won’t be free.

Are 5G Phones Safe to Use on Airplanes?

5G is the latest generation of wireless communication and it uses a different radio frequency than aviators. On land, 5G sits on the 3.4-3.8GHz radio frequency band while plane technology relies on the 4.2-4.4GHz frequencies. However, cellular picocells on planes will likely operate at much lower frequencies than standard radio waves. This means zero interference with altitude readings or other aviation systems.

That said, since phones send the strongest signals when they’re attempting a connection, aircraft will become a significant source of varying radio waves. We don’t know how it could affect the electronic equipment on planes simply because airlines have never had to deal with it.

Should you worry about it? Not really. Modern technology allowed airlines to equip their aircraft with top-tier protective shields which prevent unwarranted interference. You should also remember planes already have to deal with different radio frequencies when they’re near the ground — so they’re prepared to handle it.

What many people seem to not talk about, though, is the cybersecurity risks associated with being connected to the internet on a plane. The main concern here is the possible surveillance of companies supplying 5G on board. Since your data has to go through a transmitter, your privacy may be compromised without you realizing.

If you think you’ll be one of the first to try 5G in airplane mode, you should consider getting security software to protect your personal information. A VPN provides all-around security for mobile devices with top-grade encryption and leak protection. Get PIA to keep your data private on any device – it’s risk-free with our 30-day money-back guarantee.

Will the US Allow Phones on Airplanes?

The 5G situation is a bit trickier in the US. Verizon and AT&T have started their nationwide rollout of C-band 5G coverage throughout the whole country. The move was met with huge opposition from big airlines and aviation experts, who called for creating 5G-free zones around airports.

Why is 5G a problem in America, but not in Europe? The key is the radio frequencies both regions use. In the US, the 5G range falls between 3.7GHz-4.2HGz, which is higher than in European countries and overlaps with the frequencies aviation equipment use.

What makes the situation worse is the position in which 5G transmitters are installed in the US. They face more parallel to the ground, sending radio waves on a level more likely to crash with signals sent from a plane’s altimeter.

Because of these issues, Verizon and AT&T agreed to place the 5G transmitters at least two miles away from airports in the country. If they’re such an issue on the ground, it’ll probably be a while until the US even considers enabling 5G airline transmitters — at least until they decide to lower 5G frequencies to a safer level.

It’s The End of Airplane Mode in the EU — What’s Next?

As a frequent traveler, I’m both thrilled and weary of what the introduction of 5G phones on planes might mean. On one hand, you’re no longer forced off the grid for hours on end. On the other, you might have to endure loud conversations in addition to crying babies and tipsy passengers.

We’re yet to find out if introducing 5G in airplane mode will cause any safety issues. In theory, it shouldn’t — but who knows what will happen in practice? It’s possible other regions, like Australia or Canada, might follow suit with similar decisions. However, the US still needs to sort out its 5G issues on land before installing picocells on aircrafts.

If you’re planning to use mobile data on a plane anywhere in the EU, you should consider protecting your traffic with a VPN. You never know who has surveillance over the internet in public spaces – airplanes included. Use PIA to encrypt your traffic and keep your data private. It’ll also stop any accidental leaks resulting from a picocell losing connection.

What does airplane mode do to your phone?

Many mobile phones now allow you to toggle Wi-Fi and Bluetooth back on after you enable airplane mode. This means you can still use your headphones, keyboards, or similar devices and in-flight Wi-Fi.

If you’re using a public network, such as the ones that might become available on airplanes, you risk exposing your personal data. A VPN protects your information on public Wi-Fi on planes, at hotels, and airports — so you don’t have to worry about anyone spying on your search history.

Can 4G work in airplane mode?

No, airplane mode turns all communication off on your phone, including mobile data. Unlike Wi-Fi, you can’t turn mobile data on once you enable the offline mode either.

A new law in the EU will enable 5G as well as older generations of communication on board. However, 4G is known for its potential security vulnerabilities exposing your personal information to third parties. You may never know who is looking into information stored on picocells. To stay safe, connect to a VPN and encrypt any traffic you send and receive.

Does airplane mode turn off Wi-Fi?

Yes, airplane mode disables Wi-Fi on your devices. However, new phones let you turn it back on and connect to an in-flight network.

Plane Wi-Fi is known for being excruciatingly slow and unsecure. It’s best to not use it to share personal information unless you connect to a VPN.

PIA’s VPN servers keep your connection steady and safe from accidental leaks with military-grade encryption and an advanced Kill Switch. Should the plane’s Wi-Fi drop, your data is locked away from prying eyes. Download PIA VPN and protect your mobile data risk-free with our money-back guarantee.

Can 5G phones work on airplanes?

It can and it will — at least in the EU. From June 30, 2023, all aircraft carriers are required to provide a picocell in all their aircrafts. This highly-innovative technology communicates with satellites and allows phones to make calls, send texts, and use online features with ease.

As with any public network though, you need to know how you can browse the internet safely. This will save you from nasty surprises, like leaked email addresses or compromised credit card numbers.