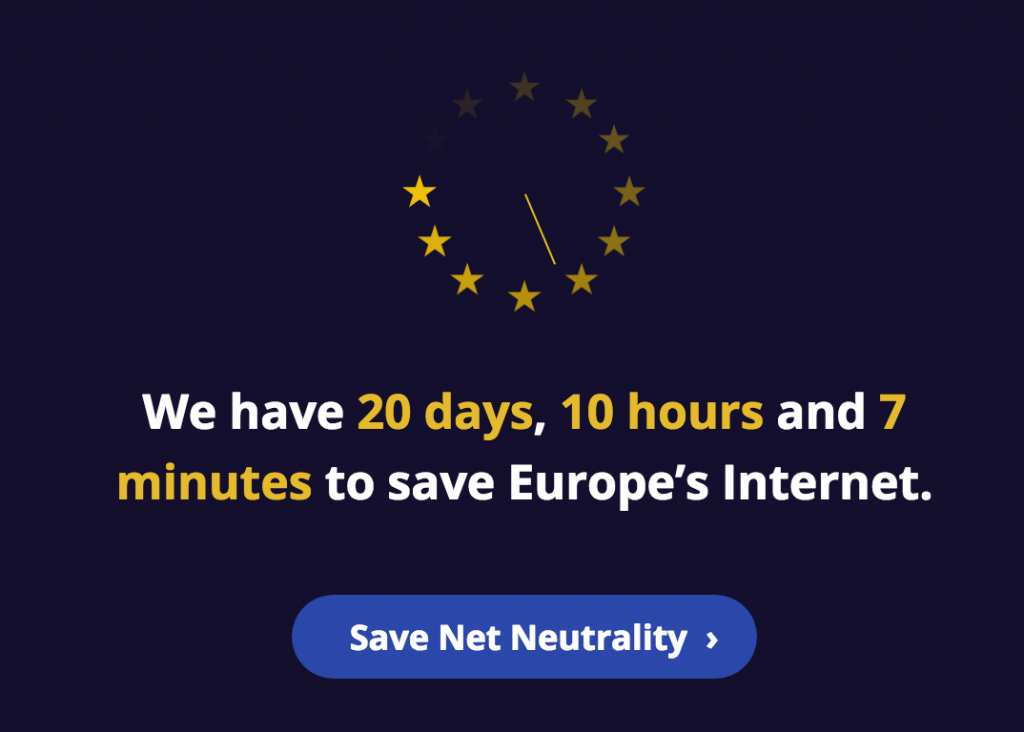 EU Net Neutrality is facing its starkest challenge yet. The millions of netizens under the laws of the European Union are fighting for the very survival of net neutrality, and many don’t even know it. The Body of European Regulators of Electronic Communications (BEREC) was tasked with setting net neutrality laws for the entire EU and has released its initial draft of EU net neutrality rules which will in turn be passed to member states’ respective regulatory agencies… They don’t bode well for the average internet user. Thanks to excessive lobbying from Europe’s biggest Internet Service Providers (ISPs) and telecommunication companies, the potential regulations are littered with loopholes that they are just hoping to get away with. Now that BEREC is opening up the official open comment period it is time for the public to make their voices heard.

Fight for the Future (FFTF) has set up a website, savenetneutrality.eu, and a coordinated campaign that starts today. Companies around the world have set their websites to include a slow loading icon artfully designed after Europe’s flag. A similar initiative by FFTF to generate comments in the United States has resulted in a tentative success, for now. The FTFF recently delivered 100,000 net neutrality complaints to the FCC asking them to investigate zero rating.

Just as Americans will likely soon have to reassemble to defeat newer, evolved challenges to their open internet rights, the European Union is currently at a decisive moment in their never-ending battle.

While the proposed net neutrality rules do ban blatant commercial consideration reasons for blocking or throttling services or parts of the web, the rules still allow for ISPs to engage in discriminatory practices. If we do nothing, net neutrality regulation in the EU will allow ISPs to throttle VPN, torrent, and p2p traffic. ISPs will be expressly allowed to classify different types of traffic and discriminate against them for the purpose of “network management.” They would be allowed to use traffic management procedures (read: throttling) to “prevent impending network congestion,” which really means whenever they want.

Muddled, but inherently malicious, incentives are there to keep ISPs in power and it makes sense that they would lobby to maintain that power. It does not make sense that the netizens of the world would lay back and accept this injustice, though. The new EU net neutrality rules don’t even outlaw zero rating; instead, zero rating will be handled on a case-by-case basis. Other countries around the world, notably India, have already started taking steps against zero rating. With zero rating allowed, internet reliant companies have no choice but to become partners with ISPs in order to reach customers, that is the opposite of an open internet.

An open internet is an elusive goal, but we must keep trudging onward. We have until July 18th, 2016 to vocally push back against BEREC. You don’t need to be a EU citizen to publicly comment. In fact, Internet users from around the world need to opine because there is no such thing as just “Europe’s Internet,” despite the unique censorship activity there. Europe’s net neutrality rules help set the standard for an open internet around the world. Now is the time to fight for the future. Make your voice heard, today!