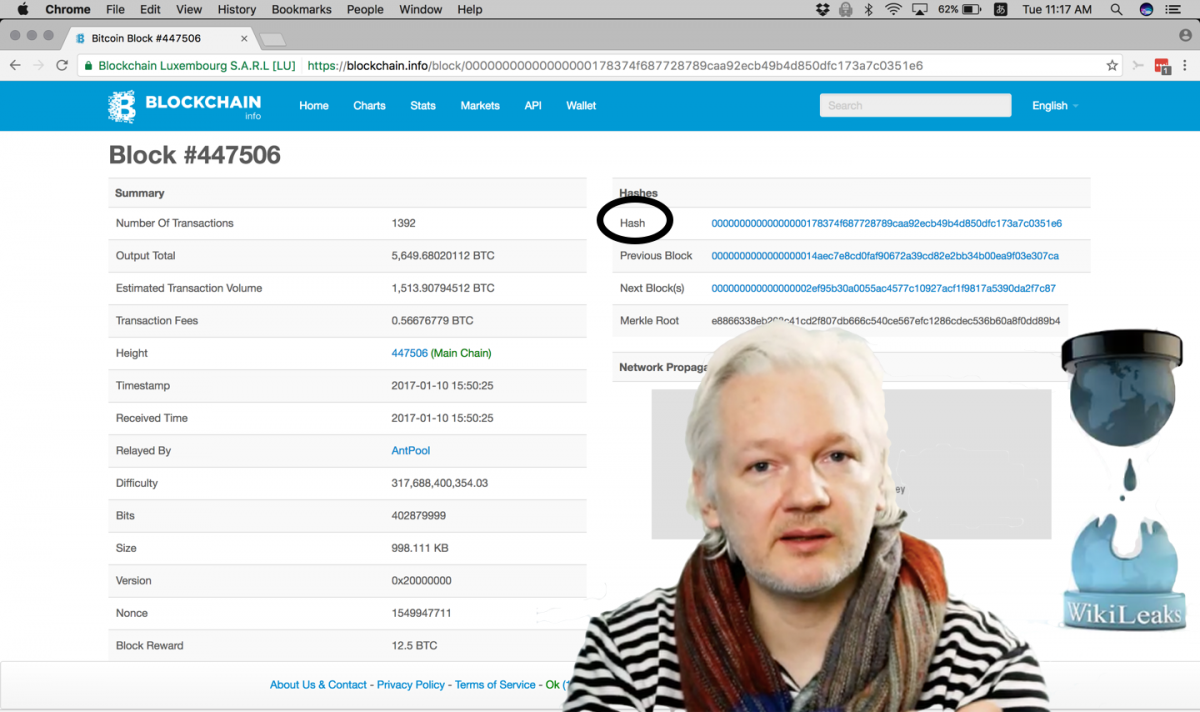 Wikileaks Editor-in-Chief Julian Assange featured the Bitcoin Blockchain in his most recent public appearance, a live-streamed Reddit AMA hosted by Twitch.tv. The Bitcoin Blockchain is the ultimate timestamping software, and we saw Julian Assange read a block hash that he wouldn’t be able to guess correctly. Wikileaks has previously had to turn to Bitcoin as an uncensorable form of money (donations) when the organization was previously abandoned by established, centralized financial institutions at the behest of the government.

A Bitcoin block hash for a valid block that has already been confirmed in the Bitcoin Blockchain has the properties that it is 1) it is random every block and 2) it is computationally impossible to figure out beforehand. Bitcoin block hashes have also been reliably used for truly random drawings, as evidenced by the Millionairemakers subreddit. Using a Bitcoin Blockchain block hash as a verification that a video, or article, isn’t pre-recorded may become an Internet standard, soon.

The live-streamed proof that Julian Assange provided is the equivalent of reading the headline off the front page of the New York Times to prove that you are, in fact, alive today. Similarly, Satoshi Nakamoto, the creator of Bitcoin engraved the immortal words: “The Times 03/Jan/2009 Chancellor on brink of second bailout for banks” in the Bitcoin Blockchain Genesis Block to mark the beginning of the Bitcoin Blockchain on January 3rd, 2009.

To be fair, the reading of the block hash from Bitcoin block 447506 proves that the video we saw was not pre-recorded. It is still feasibly possible that Julian Assange’s voice and face were digitized for our viewing pleasure. While the Bitcoin blockchain can provide Proof of Existence all day, every day for the foreseeable future, it can’t provide Proof of Free Will.