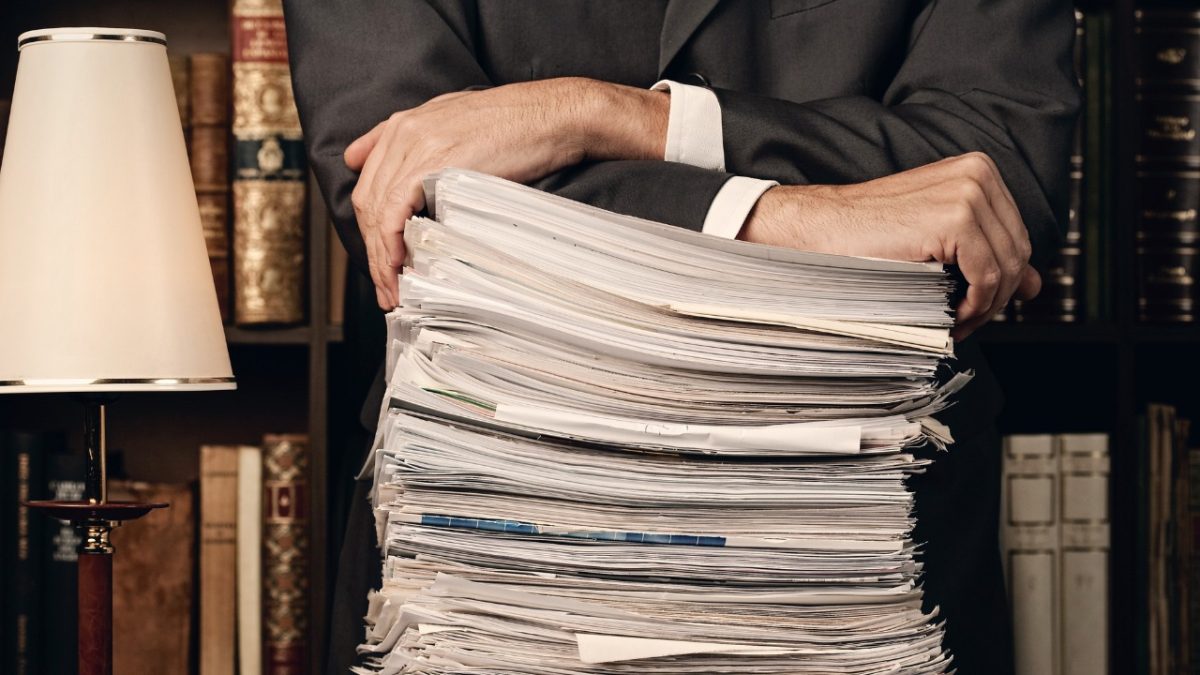 Net Neutrality is absolutely necessary as a desired outcome; it presents a level playing field. Let’s begin with establishing that. Neither socialists, nor liberals, nor conservatives want anything else than a free, fair, and level market with low barriers to entry. Where opinions go wildly apart is on the correct and optimum path and method to reach this goal, net neutrality.

There are people who believe that more regulation of the market is better. This column is not aimed at those people; they would consider Net Neutrality regulation a beneficial rule for the market, and so, pretty much a no-brainer.

Instead, I’d like to address the people who argue that more regulation always results in a worse outcome, and therefore, we shouldn’t regulate Net Neutrality, because it’s going to cause a regulation mess down the road, raise barriers to entry, and limit the marketplace. The thing is, these people have a point. We really don’t know what happens, when a telecom authority takes itself the right to regulate the net at this level, and that authority is subsequently captured by the telcos it is supposed to regulate. What we do know, however, is that telco and cable operators will take every chance they get to double dip revenue and discriminate traffic, and so, we do know there’s a behavior we want to eliminate.

And that’s exactly where the problem lies.

“Telco and cable operators”, along with their pre-Internet regulation.

In the United States, municipal utility fiber to households is comparatively rare, not to say nonexistent. In more developed countries, data fiber is a utility delivered by your electricity or utility company, installed alongside the power lines, where you get to choose your data provider just as you get to choose your electricity provider. This doesn’t exist in underdeveloped Internet countries such as the United States and Germany, where telcos were given tax breaks to roll out the Internet and of course they didn’t, they took the money and ran with it. 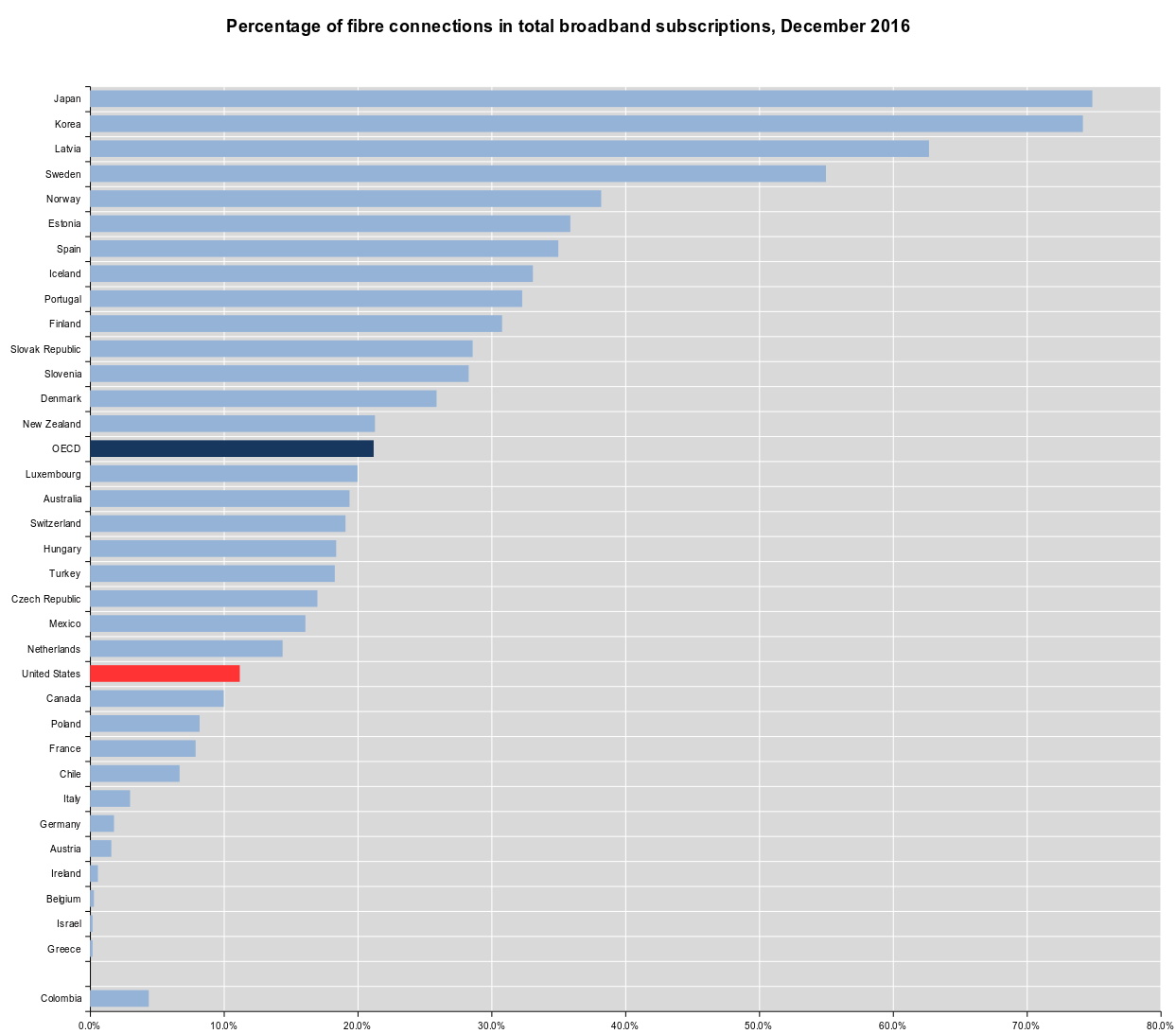 This chart doesn’t highlight household fiber, but fiber proportion of all connectivity. It can be assumed that households are fibered far after IT companies are getting fibered.

Lets’ highlight a few points from this chart, to drive the point home: in terms of modern Internet, the United States is lagging severely behind countries such as Mexico and Turkey, and the leading countries are Japan, South Korea, Latvia, Sweden, and Estonia.

The United States is not even “about average”. It is far below average. It is mediocre.

Let me make this clear that the United States being underdeveloped in terms of Internet infrastructure is not an insult or a slur; it is an observation from OECD data, merely a reading of the graph above. This is important as most people think from the vantage point of the U.S. as leading every metric. While it is true that U.S. domestic and international policy has an enormous effect on the rest of the world, one still needs to understand where the U.S. stands in order to understand such policy, and that’s what we’re discussing here.

We observed that telco and cable operators will break net neutrality the first chance they get. This is because the very concept of the Internet will utterly eviscerate their entire current business, and they know it: it’s in their strategic interest to delay, prevent, and destroy the Internet as much as they can. The market price of a voice call today is exactly zero. The market price of movie distribution is statistically indistinguishable from zero. And it is in this business landscape, that pre-Internet regulation was created in the United States to give telcos and cable companies an effective monopoly on having connectivity to homes.

We’ve also observed that in countries with a functioning data market, specifically where telcos and cable companies aren’t involved, net neutrality isn’t even a discussion. It is in some places for mobile broadband, where telcos are (surprise!) involved again.

This is important, because your local utility company has no existing cash cow in terms of expensive voice calls or cable movie distribution to lose, if they give you a good fiber connection. They are just charging you for access to market, and that’s it; they don’t stand to lose anything from connecting you to a better market than what the telcos or cables can ever provide.

The United States is not in a position where local utility companies do this. The United States is quite far from this position (as can be observed from the graph, by the way). The cause of this is previous telecom regulation that dates back to way before the Internet.

So the people who say that regulation always makes things worse in the long run are arguably correct for this specific case: The United States now finds itself in a place where telcos stand to ruin the Internet completely because of previous telecom regulation, along with tax breaks given to telcos for rolling out good Internet, which they of course didn’t.

That’s the light we have to see the current United States Net Neutrality debate in. Previous regulation have put the United States in a situation, where telcos have been given a position where they can effectively kill the Internet because it threatens a legacy business model; a chance they’ll jump on. Of course the previous vested interest will always fight its replacement! The problem was the regulation giving telcos and cable companies the regulated ability to do this in the first place.

And because the United States finds itself in this situation, caused by bad regulation, then unfortunately, more regulation is now required to prevent short-term damage before telcos and cables are permanently put on the sidelines where they are no longer in a position to prevent the United States from at least trying to climb that ladder ranking of Internet infrastructure, and maybe even get better than Mexico or Turkey — you know, maybe even get the ability to be above the OECD average.

That’s why the United States needs Net Neutrality regulation. Not because regulation is good, but because previous regulation has been so bad, it needs a short term fix to get us to a point where we don’t need any of it at all anymore.