The Patriot Act: Surveillance Before & After 9/11 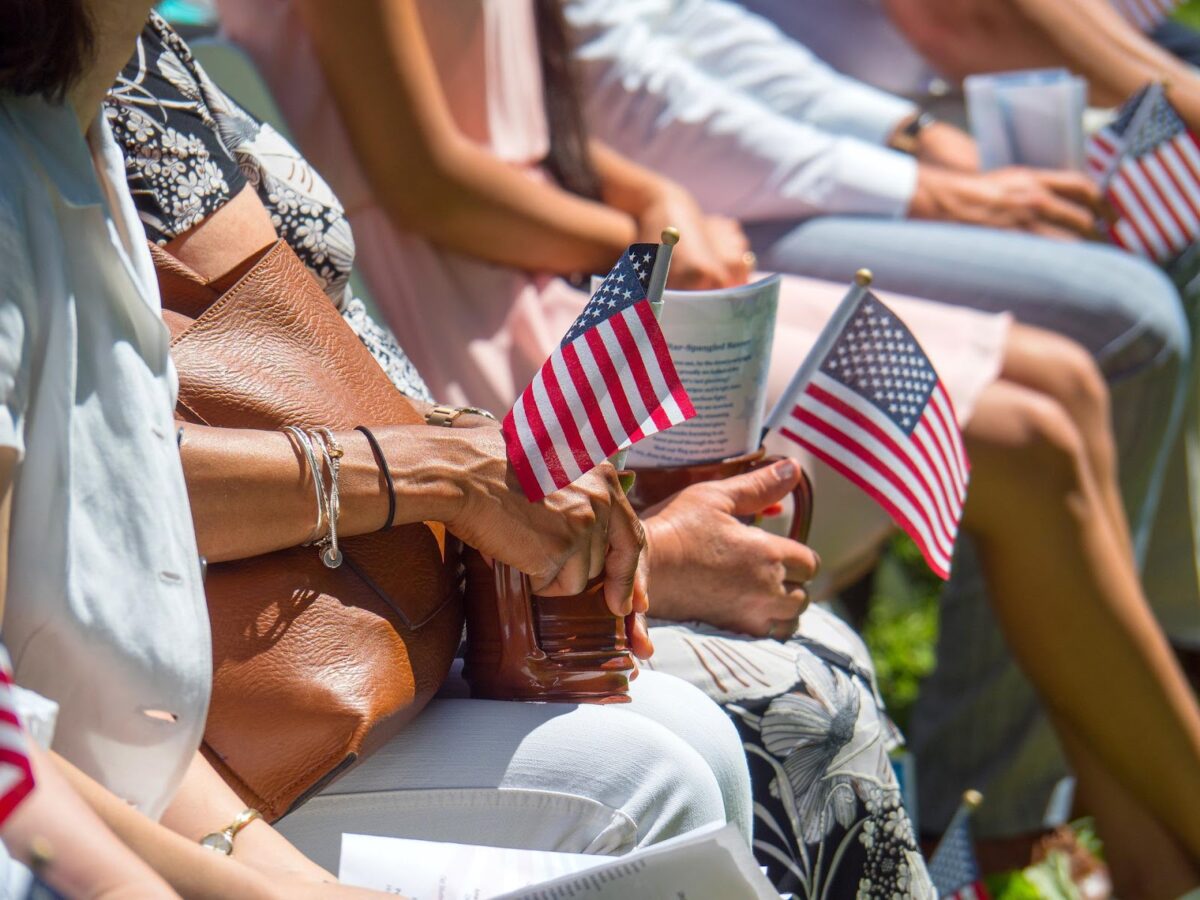 The events of 9/11 shook the world, and rightly so — the devastation left US citizens stricken with fear. We were willing to do anything to protect ourselves and our country from another terrorist attack.

Anti-terrorism legislature was introduced left and right. It didn’t take long to pass the US Patriot Act, which provided the government with broad surveillance capabilities. Now, any group, individual, or entity known to be conspiring with terrorists could be monitored legally. It was the solution and comfort Americans needed at the time.

Unfortunately, the Act included several sunset clauses making it legal for the government to perform mass surveillance on US citizens without actual proof of ties to terrorism. This isn’t the first time the US has spied on private citizens without us knowing — and it won’t be the last.

Come with me on a trip down memory lane, looking back at US surveillance over the past 8 decades. You’ll discover how personal privacy has taken a back seat, and, importantly, what’s happening to fix the problem.

What is the Patriot Act?

The United and Strengthening America by Providing Appropriate Tools Required to Intercept and Obstruct Terrorism (USA PATRIOT) Act was established after the terrorist attacks on the World Trade Center buildings in New York on September 11, 2001. While the acronym is meaningful, it’s quite a mouthful, so most people simply refer to it as the Patriot Act.

Officials discovered most of the planning for the attacks was conducted through internet communication and looked for a way to make laws regarding surveillance of terrorist suspects more defined. Federal laws related to terrorism became more defined under the Act, making it possible for the federal government to track and seize money and accounts connected to terrorist factions or organizations. The government was also allowed to divert federal funds to help victims of terrorist attacks, and anti-terrorism funding was increased.

Understanding the law with all its loopholes and clauses can be difficult, so let’s break down some of the pros and cons of the Patriot Act. 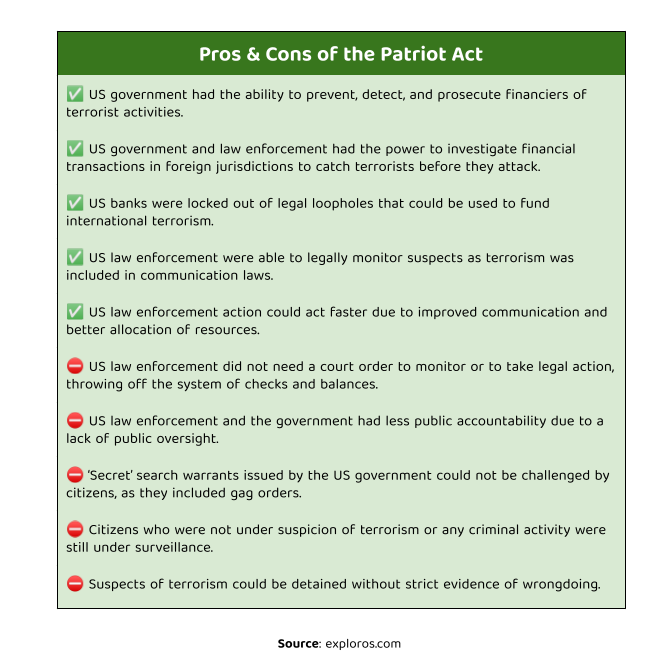 What Provisions of the Patriot Act Were Deemed Unconstitutional?

Several of the sunset clauses included in the Patriot Act were deemed invasive by privacy rights activists, government officials, and private citizens in the US. Sunset clauses expire if they aren’t reauthorized after a specific time frame, generally around 3-10 years.

The following sketchy Patriot Act clauses were extended by the USA Freedom Act in 2015, but expired in 2020:

It wasn’t only laws under scrutiny. During the mass hysteria of 9/11, the US government detained legal US citizens and immigrants who weren’t suspected of or charged with a crime. This led to a public outcry regarding these individuals’ constitutional rights, as well as a call to release people with no proven connection to the 9/11 attacks. Unfortunately, it had already created a pronounced ethnic divide and made some immigrants targets.

Is the Patriot Act Still in Effect?

The Patriot Act wasn’t reauthorized, so it expired on March 15, 2020. Still, surveillance hasn’t stopped, not by a long shot. The USA Freedom Act, while a vast improvement on the Patriot Act, still provides plenty of loopholes.

What Is the USA Freedom Act?

The USA Freedom Act came into effect in 2015, to right the wrongs of the Patriot Act but it still leaves a few loopholes allowing government surveillance with little to no proof of illegal or terrorist activity.

What It Got Right

When Snowden disclosed the CIA’s bulk collection of private citizens’ phone communications, it became clear our conversations weren’t so private. The USA Freedom Act banned the bulk collection of citizens’ personal data. It led to the reform of the FISA court and gave more power to the Amici role created in 2013, to ensure surveillance is executed legally and civil liberties are upheld.

Where It Needs Work

The Freedom Act doesn’t include changes to Section 702 of the 2008 FISA Amendments Act, which includes a law allowing the government to conduct mass surveillance. It also lacks concrete procedures for deleting information that has nothing to do with the target suspect. In addition, the language still makes it possible for law enforcement or government officials to collect information with minimal proof a threat exists.

Just as troubling, it allows for a 72-hour hold of any person the government has ‘reasonable’ cause to suspect, enabling the Attorney General to get a new surveillance order. While this is a step up from undefined detention, suspects can still be detained without any real proof of wrongdoing for up to 3 days.

The US Government has always conducted surveillance on private citizens in one form or another. It only intensified after the 9/11 attacks, giving lawmakers the ability to make most of its surveillance legal — at the cost of citizens’ privacy. Broad surveillance more or less started in the 50s in the US.

The government intended to use FISA to gain the power to spy on foreign agents and groups, but it ended up broadening surveillance reach to US citizens. Soon, the government was secretly spying on the Average Joe, sidestepping citizens’ constitutional right to privacy. Later, as technology advanced, the government used wiretapping to monitor electronic communication, with ‘reasonable’ belief counting as probable cause.

The timeline below provides a snapshot of some of the most relevant acts regarding surveillance and privacy rights in the US.

Are Whistleblowers Protected if They Leak Evidence of Illegal Surveillance?

The Whistleblower Protection Act (WPA) was created in 1989 to protect Federal employees who disclose tangible evidence of the following by the government:

The Act prevents retaliation like demotions, pay cuts, or dismissals for whistleblowers, and provides legal support if they’re retaliated against. More importantly, it allows whistleblowers to make disclosures confidentially. So, why did Edward Snowden seek asylum in Russia? He was a federal employee disclosing evidence of a violation of laws, which should be protected.

Well, his method of disclosure was a bit loud and bypassed all the proper channels — Snowden stole official documents and leaked them to the British newspaper, The Guardian. Regardless of his reasoning for not reporting it through US channels, his leak to a foreign entity branded him a spy and wanted for espionage.

Some people have expressed worry the former computer intelligence consultant will switch sides as he’s a permanent resident in Russia. Considering 58% of state-sponsored cyberattacks in the US in 2021 originated in Russia, the thought is alarming. It seems, however, Snowden himself put the idea to rest in his interview with NPR, making it clear he doesn’t intend to cooperate with Russia on any cyberattacks or government activities.

How to Avoid Online Surveillance

The US government monitors what you do online if they have a reason to suspect you’re doing something you shouldn’t be, but they aren’t the only ones. ISPs, cybercriminals, websites, and even your neighbor Ted could monitor your online habits. Thankfully, you can avoid online surveillance with PIA VPN.

PIA provides secure tunneling protocols and robust encryption to shield your traffic from anyone who may be snooping. No one can spy on you, because our encryption hides your online activities and we change your IP address to make sure you’re invisible.

Our MACE feature also blocks trackers, malware, and WebRTC at the DNS level before they reach your device, so you’re safe from anything that could compromise your privacy. A VPN can’t protect your devices against malware and phishing attacks, though. It’s still up to you to be vigilant and follow basic online safety habits.

What exactly does the Patriot Act do?

The Patriot Act was created to monitor and deter terrorist activity in the US by expanding the reach of law enforcement’s investigatory powers. It also covers the punishment of terrorists and gives law enforcement the right to perform surveillance on anyone who is suspected of being involved in terrorist activities without their knowledge.

Unfortunately, people who aren’t criminals may be treated like one. The Patriot Act only requires reasonable belief in order to monitor your online activity. Thankfully, you can avoid surveillance. PIA uses strong encryption to scramble your data and make it unreadable to anyone who may be watching.

What individual rights does the Patriot Act violate?

The most commonly cited violation is the Fourth Amendment, which states the government can’t unknowingly conduct a search without a warrant or probable cause to believe a criminal act took place. Violations of the Fourth Amendment are considered a gross invasion of privacy.

Many people believe it violates most of the Bill of Rights, especially rights such as free speech, public trial, due process, and freedom from self-incrimination. PIA VPN can help you protect those rights by restoring your online privacy.

Is the Patriot Act still in effect?

The USA Freedom Act replaced The Patriot Act when it expired on March 15, 2020. While it was a step in the right direction, it still allows for several loopholes when it comes to US citizens’ rights. Mainly, it doesn’t include regulations for the deletion of information on non-suspects obtained during surveillance, so irrelevant personal data can be kept indefinitely.

This means the government could still collect and store citizens’ data, even without you knowing. To combat data tracking, use PIA VPN. We never collect usage logs, so even if authorities asked, we wouldn’t have any data to give them.

Is the USA Freedom Act the same as the Patriot Act?

The USA Freedom Act is similar but it has some vast improvements over the Patriot Act, including a ban on bulk collection of citizens’ personal data and reform of the Amici role in the FISA court. Amici now watches carefully to make sure any search or surveillance is executed legally.

Prevent spying before it becomes an issue by installing PIA on your devices. One subscription to PIA covers up to 10 simultaneous connections, so you can protect every gadget you own. We even have a 30-day money-back guarantee, so it’s risk-free to test our VPN!