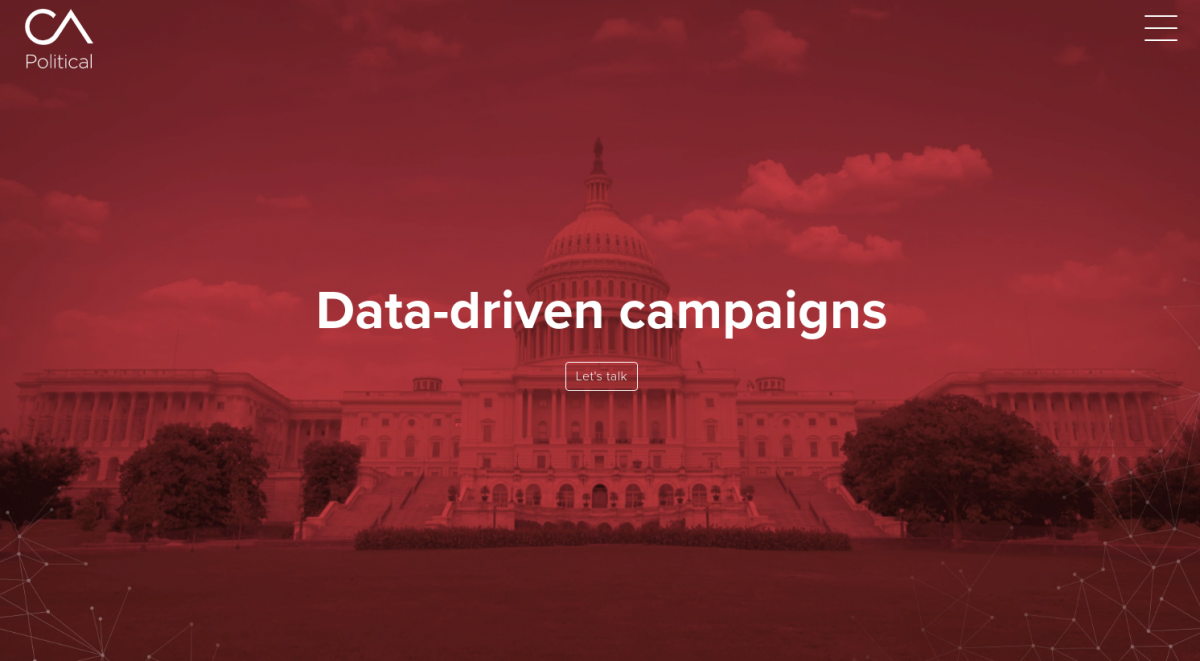 Earlier this week, Facebook released a statement about ads it carried which had been paid for by Russian sources. It now says that around ten million people in the US saw the ads, and that 44% of total ad impressions were before the 2016 US election. Strikingly, for 50% of the ads less than $3 was spent. This suggests that many of the ads were micro-targeted. A recent article in the Washington Post confirms the precision of the operation:

“Russian operatives set up an array of misleading Web sites and social media pages to identify American voters susceptible to propaganda, then used a powerful Facebook tool to repeatedly send them messages designed to influence their political behavior, say people familiar with the investigation into foreign meddling in the U.S. election.”

However, there is increasing evidence that an even more sophisticated approach was used to influence voters in the US election, and on a far larger scale, by the little-known company Cambridge Analytica. The company certainly played a key role there, as its Web site proclaims: “Cambridge Analytica provided the Donald J. Trump for President campaign with the expertise and insights that helped win the White House, causing the most remarkable victory in modern U.S. political history.”

Perhaps the best exploration of Cambridge Analytica and its methods is an article originally published in German last year, and available in English on Motherboard. It describes the field of psychometrics, which seeks to measure psychological traits. The “OCEAN” model uses five axes to do this: those of openness, conscientiousness, extroversion, agreeableness, and neuroticism.

An otherwise rather obscure field was revolutionized by the work of the researcher Michal Kosinski. He had the idea of creating a Facebook app called “MyPersonality” to evaluate the OCEAN profile of online respondents. Millions of people took the test, creating the largest dataset of psychometric scores along with associated Facebook profiles ever to be collected. Kosinki then looked for correlations between the profiles and the kind of things respondents had liked on Facebook – information that was publicly available at the time. Soon he found he was able to predict a subject’s answers to the OCEAN questions just by looking at fewer than a hundred of his or her likes. But the biggest breakthrough came from realizing that things worked the other way too:

“not only can psychological profiles be created from your data, but your data can also be used the other way round to search for specific profiles: all anxious fathers, all angry introverts, for example – or maybe even all undecided Democrats? Essentially, what Kosinski had invented was sort of a people search engine.”

Cambridge Analytica encourages visitors to its Web site to evaluate themselves using the OCEAN psychometric framework. By applying these kind of technique to huge quantities of personal data obtained from many different sources, both online and offline, Cambridge Analytica has taken this approach to its ultimate conclusion. It has built up detailed profiles of US voters, as it proudly boasts: “With up to 5,000 data points on over 230 million American voters, we build your custom target audience, then use this crucial information to engage, persuade, and motivate them to act.”

Although still relatively unknown, Cambridge Analytica turns out to have extremely close links with some of the most powerful people in Western politics. A long article in the Guardian earlier this year attempted to disentangle the complicated relationships between Donald Trump, his billionaire backer Robert Mercer, Steve Bannon and Cambridge Analytica, as well as other key players. It also explores the involvement of the company with the Brexit referendum that saw a slim majority of people in the UK vote to leave the European Union. As a now-deleted statement from the Leave.eu campaign explained in November 2015:

“Cambridge Analytica are world leaders in target voter messaging. They will be helping us map the British electorate and what they believe in, enabling us to better engage with voters. Most elections are fought using demographic and socio-economic data. Cambridge Analytica’s psychographic methodology however is on another level of sophistication.”

The UK’s data privacy watchdog, the Information Commissioner’s Office, is currently investigating how voters were targeted during the Brexit referendum campaign. The Guardian reports the Commissioner as saying: “if political campaigns or third-party companies are able to gather up very precise digital trails to then individually target people, that is an area [where] they are going to be outside the law”.

The fact that Cambridge Analytica was involved with two of the biggest political upsets in recent political history – the election of Donald Trump and the Brexit vote – is intriguing. It turns out that there’s another British connection, one which may open the way for those 230 million US voters to find out what exactly Cambridge Analytica holds on them:

“although Cambridge Analytica is largely owned by Trump’s biggest donor, hedge-fund billionaire Robert Mercer, and though its vice-president at the time of the US election was Trump’s former chief strategist, Steve Bannon, the company was spun out of an older British military and elections contractor, SCL, with which it still shares staff, directors and a London office.”

As the Guardian explains, because Cambridge Analytica seems to have processed Americans’ data in Britain, under UK data protection laws US citizens can demand to see that information. And that is precisely what the US professor David Carroll is doing, using crowdfunding to support his legal action. If he is successful, it will be a simple matter for all US voters to follow his example, and to demand information about the thousands of data points that Cambridge Analytica claims it holds about them.

Carroll isn’t the only person trying to shine light on the activities of companies gathering personal data on a huge scale. Paul-Olivier Dehaye wants to do something similar for Facebook. He has asked the company for details about what it holds on him. He’s published his formal request to the company, and has set up an easy-to-use site that helps other Facebook users do the same.

It’s increasingly clear that well-known Internet companies like Facebook, as well as secretive outfits like Cambridge Analytica, can have a big impact on our lives in important ways. Applying their algorithmic engines to the vast databases filled with intimate details of our personal interests and activities, decisions are made about us, and actions taken as a result, without us knowing how or why. As we’ve written before, the time has come to bring some accountability to algorithmic decision-making. In the wake of revelations about Russian-funded ads on Facebook, it looks like politicians are starting to agree.