What can we learn from Palantir’s secret user manual for police users of its big data software? 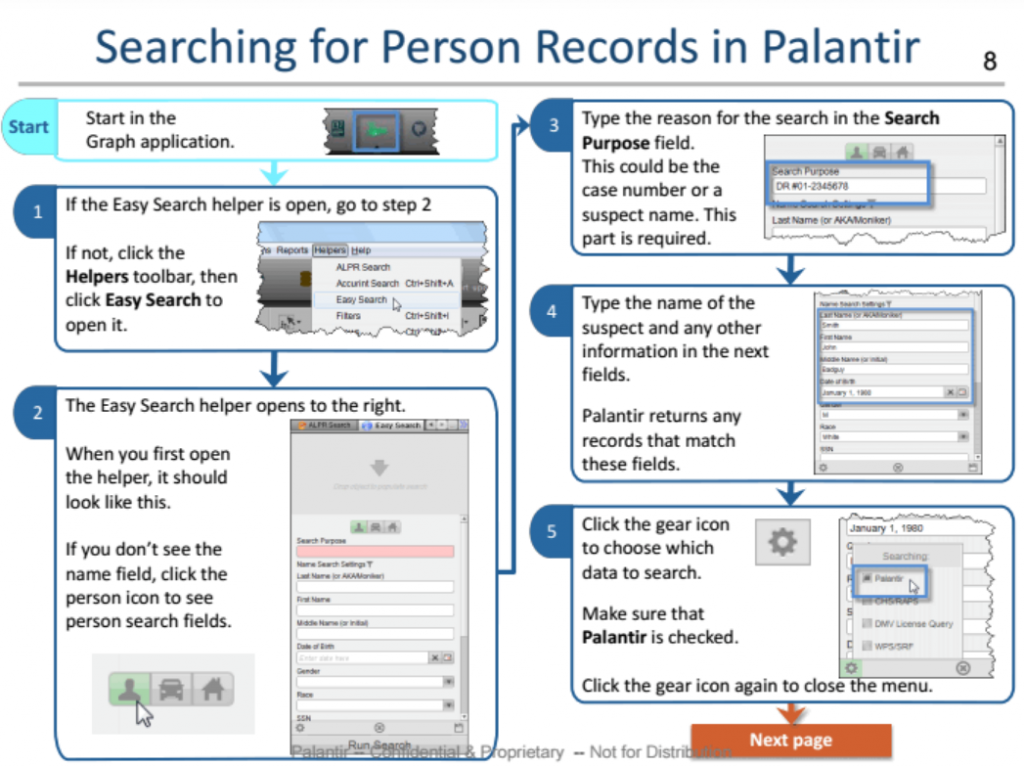 Two years ago, Privacy News Online wrote about the mysterious Palantir Technologies. It describes itself as a company that makes “products for human-driven analysis of real-world data“. It is a data analytics supplier at heart, but one that is working on some of society’s most sensitive data, notably the kind used by law enforcement to track criminals. A Bloomberg article last year gave some details of how the Los Angeles Police Department uses Palantir’s Gotham product for Operation Laser, a program to identify and deter people likely to commit crimes:

Information from rap sheets, parole reports, police interviews, and other sources is fed into the system to generate a list of people the department defines as chronic offenders, says Craig Uchida, whose consulting firm, Justice & Security Strategies Inc., designed the Laser system. The list is distributed to patrolmen, with orders to monitor and stop the pre-crime suspects as often as possible, using excuses such as jaywalking or fix-it tickets. At each contact, officers fill out a field interview card with names, addresses, vehicles, physical descriptions, any neighborhood intelligence the person offers, and the officer’s own observations on the subject.

That description makes clearer the kind of data that is being gathered, and how it is being used for predictive policing. Thanks to a recent public record request, Motherboard has obtained a user manual that provides insights into the detailed workings of the Palantir Gotham software.

As you might expect, Palantir’s Gotham excels at finding connections between isolated pieces of data, typically a person’s name, or a car’s license plate. If the authorities have both, they can use automatic license plate reader data to find out where that individual has been, and when he or she has been there. That potentially provides an extremely detailed picture of what someone has been doing over a given time period.

If only a name is available, there is still plenty that Gotham can provide. Possible hits in the database include a person’s email address, phone numbers, current and previous addresses, bank accounts, social security number, business relationships, family relationships, and license information such as height, weight, and eye color. Again, those pieces of information start to draw an extremely complex web of relationships. Crucially, they are likely to involve people who are not suspected of involvement of any crime, but who simply happen to be connected to the person of interest. That kind of guilt by association is particularly troubling, not least because the people affected are unaware that they are being flagged up in this way.

As the manual pages for Palantir’s software indicate – see the sample image at the top of this post – the process of searching for information is extremely easy. Similarly, Gotham makes it simple to apply three types of visualization tools to the data: the Histogram tool, the Map tool, and the Object Explorer tool.

These tools all let police graph, map, visualize, and connect dozens of different types of data points. So, police can chart the relationships between individuals. Police can click on an individual on this chart and see everything about them: their email addresses, their bank account information, their license information, etc. Police can also put current addresses, previous addresses, locations of a suspected crime, work locations, family addresses, and travel history (as captured by [Automatic License Plate Reader]-cameras) on a map.

The Histogram tool helps police find correlations between different data points by representing them visually – a good way to spot trends. The Heatmap tool allows the spatial concentration of data within a certain area to be displayed. Again, this makes it much easier to spot specific areas of interest. Finally, the Object Explorer tool allows data to be displayed as traditional numeric charts, histograms, timelines, and pie charts. Which of these is most appropriate depends on the input data.

It comes as no surprise that Palantir’s Gotham program offers these kind of features. They are precisely the kind of thing that you would expect modern data analytics software to provide. But what is striking from the screenshots of the manual pages obtained by Motherboard is how easy it is to search through distinct, distributed databases. As far as law enforcement officers are concerned, the process is seamless: they simply input a piece of information, and the program does the rest, searching through multiple stores of data, finding connections. Again, that is what you would expect a well-designed piece of software to do. But the implications are important.

This kind of system makes it trivially easy for police officers to search for information. Since there is no barrier to doing so – no complicated commands to be entered, for example – it is likely that they will turn routinely to the software to find links and leads. Although enhancing their ability to combat crime is clearly welcome, it is also likely to engender a sense that they should be able to call up all information about anyone, as well as about their connections. The very ease-of-use of the system could have a corrosive effect on police attitude to privacy – that it doesn’t exist, thanks to Palantir’s all-knowing Gotham software – and maybe shouldn’t exist.

Perhaps the most troubling aspect of all this is that it is happening all the time, but in the background. There is no way to know whether your name has appeared in a search, perhaps as the result of a distant, and wholly innocent, link to a person under investigation. As the 2018 Bloomberg article revealed, some police are already being encouraged to use even the smallest infraction as a reason to stop and question people in order to gather more data. It’s easy to see the same happening to people whose name comes up in a Palantir search thanks to some vague connection it has spotted. As with all these kinds of privacy problems, an important part of the solution is greater transparency about what is happening. Alongside that, a system is needed that allows redress when the all-knowing Palantir Gotham gets it wrong, and starts seeing things that aren’t there.

Featured image by Palantir, via Motherboard.