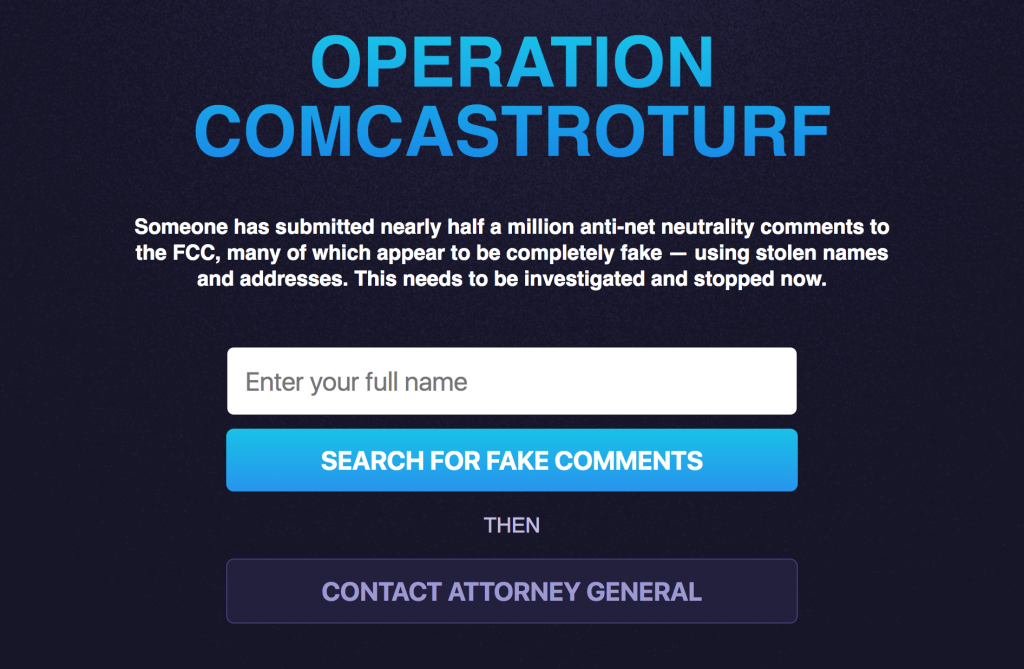 Comcast has sent a formal cease and desist letter to Fight for the Future (FFTF) demanding control of its pro-net neutrality website, comcastroturf.com. FFTF set up comcastroturf.com to allow people, real Americans, to check the millions of FCC comments to see if their name has been used to submit a fake comment to the FCC about net neutrality.

The Comcast notice was received by FFTF earlier this week; Comcast demanded that FFTF hand over comcastroturf.com to the cable company because it violates the company’s “valuable intellectual property.”

You can't make this stuff up. Comcast sent us a cease and desist for our site https://t.co/RITznxLJn6 Our statement: https://t.co/TjFRrzJmWS pic.twitter.com/x3H5sJmN4P

Comcast leads charge in Fight for the Censorship with takedown letter to comcastroturf.com

Evan Greer, FFTF’s campaign director took to Reddit to share the troubling news and call out Comcast for their ridiculous behavior. She concluded her post with the FFTF’s hardline response:

Fight for the Future has no intention of taking down Comcastroturf.com, and we would be happy to discuss the matter with Comcast in court.

After all, the FCC’s attempt to take down net neutrality is based on a “deliberate misrepresentation of how the Internet works.” The telecom and ISPs lobbying groups have been at this for years – spreading misinformation about the Internet in an attempt to garner more control over it. The CTIA, for example, tried to tell the FCC that internet browsing history and app usage data are not “sensitive information.”Millions of Americans have tried to comment to the FCC to inform them of net neutrality’s real costs and benefits – these real comments from real Internet users that will be affected by this change in rules outnumber the proven fake comments. The astroturfing has been exposed on the public media stage, and now Comcast’s attempt to bring down this spotlight has also been exposed on the public stage.

Disclosure: Private Internet Access is a major financial supporter of Fight for the Future.