Article 13: EU passes copyright directive which will lead to a more censored internet 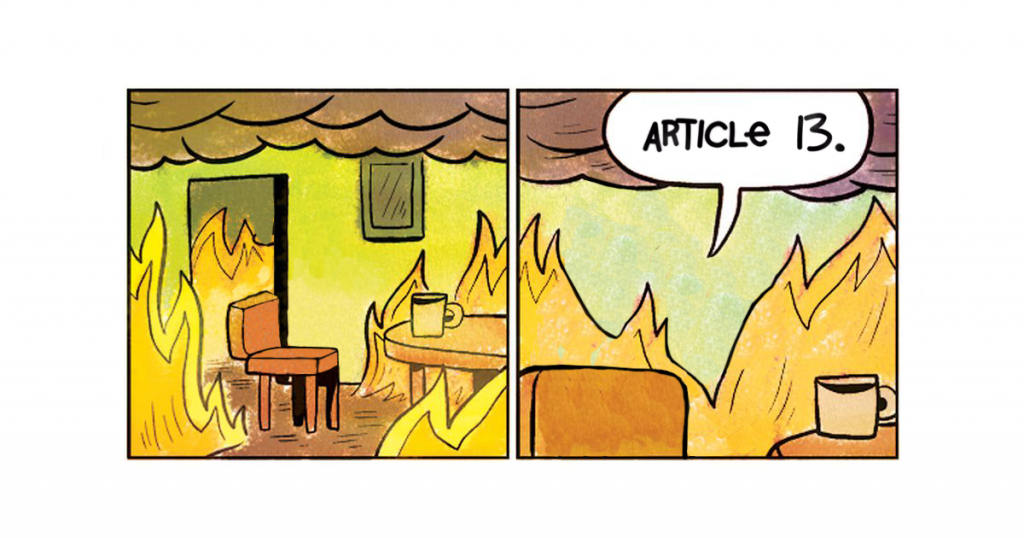 The European Union (EU) has passed all articles, including Article 13 and Article 11, of the Copyright in the Digital Single Market Directive.  Article 13 of the copyright directive mandates that websites are responsible for keeping copyrighted materials off of their site – in the most absolute sense. Over the next two years, the directive will need to be written into law in each of the EU member states – thought none of the companies in any of the states know how they will comply with the coming laws. The EU’s actions today will lead to a more censored and less private internet with more surveillance. Julia Reda, a member of the European Parliament that has been campaigning against Article 13 and Article 11 for years, summarized concisely in a Reddit AMA:

Article 13 may not even be technically feasible, yet it will still break the internet

Article 13 changes the current Take Down requirements and upgrades them to Stay Down requirements. Essentially, a site like YouTube only has to remove copyright infringing material when it is reported. Under the new EU copyright directive, YouTube would be forced to implement some sort of upload filter to make sure that that particular piece of copyright infringing material “stays down.” Even Google hasn’t figured out how to do this yet – just imagine how difficult it will be for smaller sites and companies. The Stay Down approach to copyright infringement also applies to livestreams. Under the passed directive, livestreaming sites like Twitch would be responsible to make sure that no streams feature copyrighted music – another technical challenge that cannot be legislated away.

Outrage at the passing of Article 13 grows

The reaction has been swift and powerful. Around the EU, from Switzerland to Germany and beyond, hundreds of thousands of citizens marched in protest of the ridiculous, internet breaking, rules. Even more, over five million, signed an online petition to bring an end to the vote. Despite all this, On March 26th, 2019, the EU Parliament still voted to pass Article 13, Article 11, and the rest of the copyright directive.

Part of making sure that anti internet legislation like Article 13 doesn’t continue to be proposed and passed is holding the politicians that voted for it accountable. The full record on who voted for and against Article 13 is available online at this link courtesy of Julia Reda. The course of action is simple: If your locally elected politician voted for Article 13 – don’t vote for them.

In the meantime, EU internet users have no choice but to sit back and watch this poorly conceived law take hold and the internet shrink around them – that is, unless they have Private Internet Access.