A million tiny eyes in the sky: how a new generation of nanosatellites pose a threat to privacy 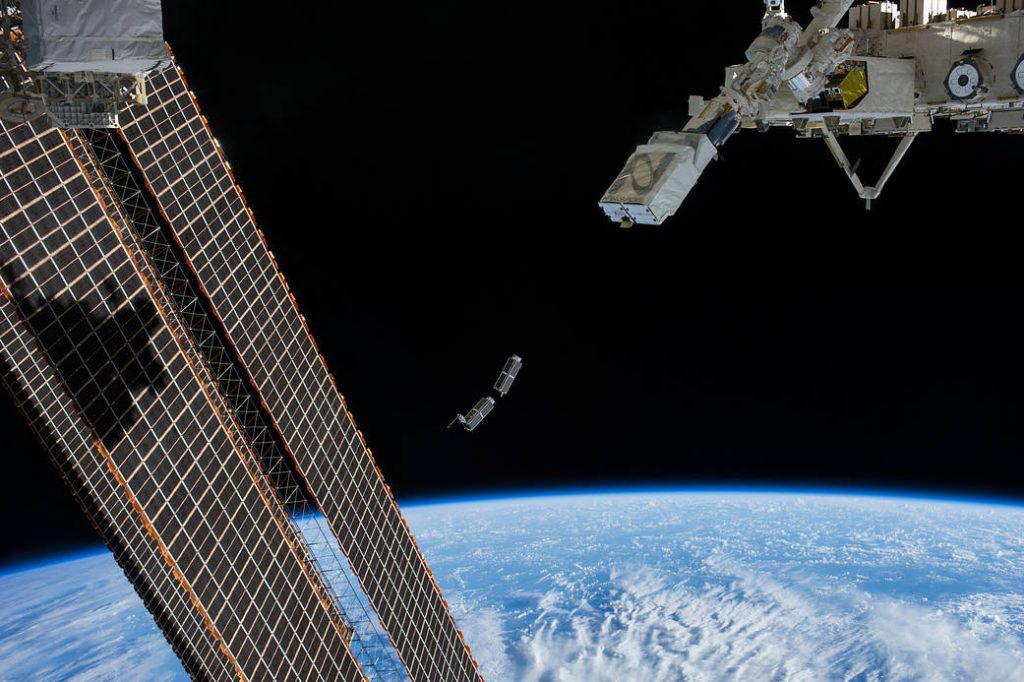 Everyone knows that surveillance is ubiquitous – on the Internet, in the street, at work, at school, in our homes. What made that constant spying possible was the amazing advance of digital technology. Thanks to powerful computers and massive storage facilities, it is now possible to “collect it all“, as the NSA wanted, and to keep and analyse it all too. Low-cost digital videocameras mean that the authorities can easily afford to install millions of CCTV systems in cities and on roads. Miniaturization and the dramatic drop in price for computing power has allowed digital intelligence to be placed in every domestic device to create the Internet of Things – the perfect means for spying on us in our homes.

The same dynamics that created today’s threats to privacy are also driving tomorrow’s dangers. Another field is experiencing its own technological revolution – that of satellites. The foundations were laid back in 1999, when the CubeSat format was devised, described here by NASA:

CubeSats are a class of research spacecraft called nanosatellites. The cube-shaped satellites are spacecraft size in units or U’s, typically up to 12 U (a unit is defined as a volume of about 10 cm x 10 cm x 10 cm and typically weigh less than 1.33 kg).

The creation of an open standard helped lower costs through the use of mass-produced components. That, in turn, drove rapid innovation in this area, as happened within the digital world. A decade ago, NASA instituted its CubeSat Launch initiative, whereby selected CubeSats were able to fly as auxiliary payloads on NASA’s main rocket launches – what is known as “ridesharing”. This program is aimed at educational establishments, but the success of the CubeSat standard has encouraged a number of companies to offer commercial ridesharing services to anyone, at a modest cost. As an article in the New York Times explains, this new approach has led to a rapid growth in the number of surveillance satellites put into orbit:

Nearly 730 Earth observation satellites were launched over the last decade, according to Euroconsult, a research firm that tracks the space market. In the next 10 years, 2,220 more will follow them into orbit, training an increasingly wide array of sensors on the planet.

It’s not just purely visual information that is being gathered. Now there are infrared sensors that detect heat; “hyperspectral” sensors that identify minerals, vegetation and other materials; and radar scanners that can build three-dimensional images of the landscape below. More recently, HawkEye 360 has started launching small satellites that can track the billions of wireless signals emitted around the world – a way of understanding the behavior of everything from mobile phone networks to cargo ships.

The company is part of the new industry of geospatial analytics, or “geoanalytics”. It takes as its raw material the vast quantities of data being produced by small satellites constantly monitoring the earth and its inhabitants. It then typically applies artificial intelligence techniques in the form of specialist algorithms that hunt through that data flood for signals of relevance to customers. Another company in this sector, Orbital Insight, explains its services in the following way: “By applying machine learning and computer vision technologies, we build software that interprets data at petabyte scale to drive better business and policy decisions.” Similarly, SpaceKnow says:

Our AI driven platform unlocks the power and potential of geospatial analysis. SpaceKnow is pioneering the use of space-based data that now casts the trends of the global economy and business activity and provide insights to financial markets, businesses, defense, government, and not-for-profits.

As that indicates, geoanalytics is typically concerned with looking at larger trends that emerge from satellite data – for example, shipping activity, construction of factories, deforestation. However, it is hard to see things stopping there. Now that a promising new sector is emerging thanks to the availability of low-cost surveillance satellites, it is likely that more companies will enter this market, driving costs down further. Nanosatellites will become ever-more powerful, scanning ever-more aspects of human activity.

Much of that will be legitimate and benign. For example, accurately tracking deforestation will be a boon to organizations seeking to fight the illegal timber trade, or to locate unsustainable palm oil plantation practices. Using data about new factories or new housing projects could give more accurate readings of economic activities and social developments, bypassing local authorities that may be unwilling to release a true picture of what is going on, for whatever reason.

But as this blog has repeatedly emphasized, it is naive to look at one set of data in isolation. What might seem harmless anonymous information can be combined with other, equally harmless-looking data to provide deep insights into a person’s life that infringe upon their privacy in important ways.

The nanosatellite revolution brings with it undoubted benefits. But there are also threats that are novel. For one thing, the satellites are invisible, which means that few outside the industry will even be aware that they are there, constantly circling overhead. And even if people are conscious of and worried about this new assault on their privacy, it is hard to see what they can do to protect themselves. People can’t hide in their houses all the time: they need to go out, drive cars, take public transport. Companies will be even more exposed, since their economic activities are on a larger scale, and therefore even more visible from space.

As with the digital revolution, it is unreasonable – and probably impossible – to try to halt the continuing evolution and advances of the nanosatellite sector. With the benefit of hindsight, it is apparent that certain seemingly innocuous choices in the online world – for example, the general adoption of business models based on micro-targeted advertising – have had serious adverse consequences for privacy. While the geoanalytics industry is still in its infancy, now would be a good time to ensure that we think carefully about the impact of millions of tiny eyes in the sky, before it is too late to do anything about it.