University of Minnesota student jailed in China for tweeting memes of Chinese President Xi Jinping: How was he caught? 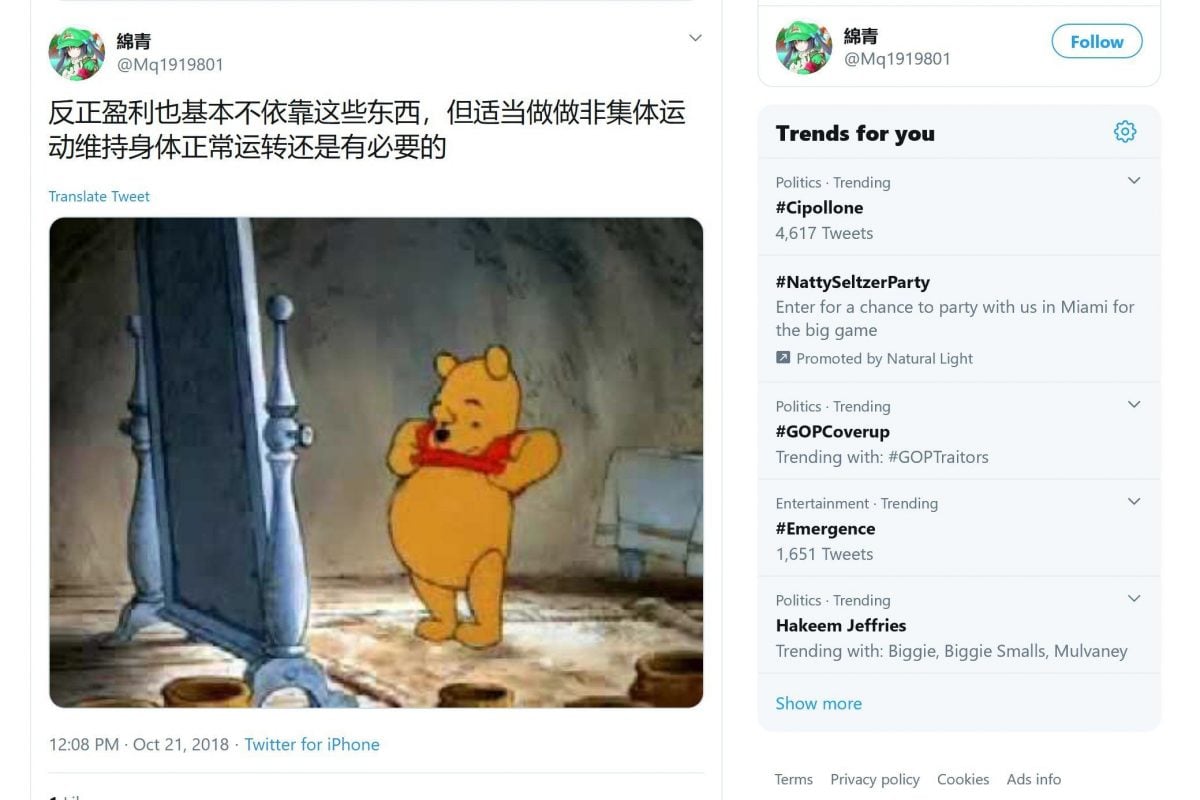 In 2019, a twenty year old Chinese international student from the University of Minnesota was arrested, tried, and sentenced in China for tweets he made from an anonymous account while studying in America. The student, Luo Daiqing, was arrested when he returned home for summer break in 2019 and formally sentenced after a secret trial in November 2019. This news was first reported by Bethany Allen-Ebrahimian for Axios on January 22nd, 2020. This represents the first time that the Chinese government has prosecuted a Chinese citizen in this way for actions committed while abroad – and all signs show that this is just the beginning.

That’s a damn good question that deserves looking into.

The Twitter account (which has since been deleted) operated by Luo was meant to be anonymous. How is it that China was able to identify Luo as the man behind the account?

The first thought might be that the Chinese government asked Twitter via a legal request to provide account information on @Mq1919801. However this was almost certainly not the case. According to the Twitter Transparency Report, of 7300 such requests from dozens of countries around the world, China made no such requests in the first half of 2019. There were also no legal requests to Twitter in 2018. It’s possible that the request was made in the latter half of 2019 and will be reported on in the yet unreleased Twitter Transparency report, but given the timeline of detainment and arrest – that is highly unlikely.

Another option is that a Twitter employee that is actually a Chinese spy procured the information on the dissident for the Chinese government. While that is incredibly illegal, it is a possibility and it wouldn’t even be the first time a government has done such a thing. Last year, WaPo reported that the Department of Justice has charged two former Twitter employees of accessing Twitter account information for the Saudi government. Personally, I don’t think this was the case here though as it’s unlikely that China would burn such a high value asset on forty odd posts and some funny memes.

Another option that can be considered is that a Chinese state controlled app was used to match images from the target’s phone to the ones posted on Twitter. China’s many popular apps, such as WeChat, have made it a point to target the transmission of memes such as the ones that got Luo in trouble. Besides pictures, the apps also screen for certain text blocks which are then censored and reported for future action. In fact, for years now, a user will send such a meme or a picture of Winnie the Pooh and the app will show the message as sent, but the receiving party will never receive it. It’s been long known that Chinese apps do this sort of automatic picture recognition, screening, and censorship actions. If such an app were to have access to the image library that contained the memes posted by Luo, it is possible that China was able to serve a legal request to said app to check said gallery for images that matched those posted to Luo’s Twitter.

The most likely scenario, though, is that Luo Daiqing was reported to the Chinese government by one of his peers at his very own school. In the United States, it is now a simple fact of life for overseas Chinese students that they are under surveillance by their peer group.

In 2017, the National Association of Scholars called on over one hundred universities to remove Confucius Institutes from their campuses, which are Chinese government funded “culture and language” education centers that have been found to exert soft power over overseas Chinese students. Senator Mark Warner commented that the Confucius Institute is “nothing but agents of Chinese services to spy on Chinese students and hold them accountable.”

The recent Hong Kong Protests has also brought the topic of international Chinese students keeping tabs on other Chinese students to the forefront. China has a long history of keeping tabs on international students all over the world. In recent years, the surveillance and consequences have ramped up considerably. In Australia, a Chinese student says her family back in China was visited by officials after she was reported for attending pro-democracy protests. In Scotland, a Chinese student also reported that his family was visited by Chinese officials after they received pictures of him attending a pro-democracy event.

Nathan Law, a former legislative member in Hong Kong who was then ejected from his position and put in jail for his protest activities, is now a graduate student studying Asian Studies at Yale University. He reports hearing that other Chinese students have been told to avoid him. He told AP:

“Even though many Chinese students are studying right here, sometimes they are all being monitored. They’re not really free of their minds and expression in this country.”

The Human Rights Watch (HRW) also issued a report on the Chinese government’s Threat to Academic Freedom. According to the 2019 HRW report which interviewed over a hundred academics:

“Academics told Human Rights Watch that students from China have described threats to their families in China in response to what those students had said in the classroom. Scholars from China detailed being directly threatened outside the country by Chinese officials to refrain from criticizing the Chinese government in classroom lectures or other talks. Others described students from China remaining silent in their classrooms, fearful that their speech was being monitored and reported to Chinese authorities by other students from China.”

Upon hearing the news, Senator Ben Sasse (R-NE) and Representative Ilhan Omar (D-MN) both called on China to release the student. Senator Sasse said in his press release:

“[…] Don’t forget that the Chinese Communist Party has banned Twitter, so the only people who even saw these tweets were the goons charged with monitoring Chinese citizens while they’re enjoying freedom here in the United States. This is what ruthless and paranoid totalitarianism looks like.”

According to legal analysis of the court documents by The China Collection, Luo should have been released earlier in January, but no media source has been able to confirm his current whereabouts or well being. Within days of this news reaching the world, the Chinese government had started scrubbing the internet of the relevant court documents – in direct contradiction to their own government rules on transparency.

The ramifications of the Chinese government’s escalating actions against free speech that occurs around the world should be troubling to everyone, not just Chinese citizens. As Allen-Ebrahimian concisely put it in her article: