US Senate hearing confirms Facebook is the perfect surveillance machine: what can we do about it? 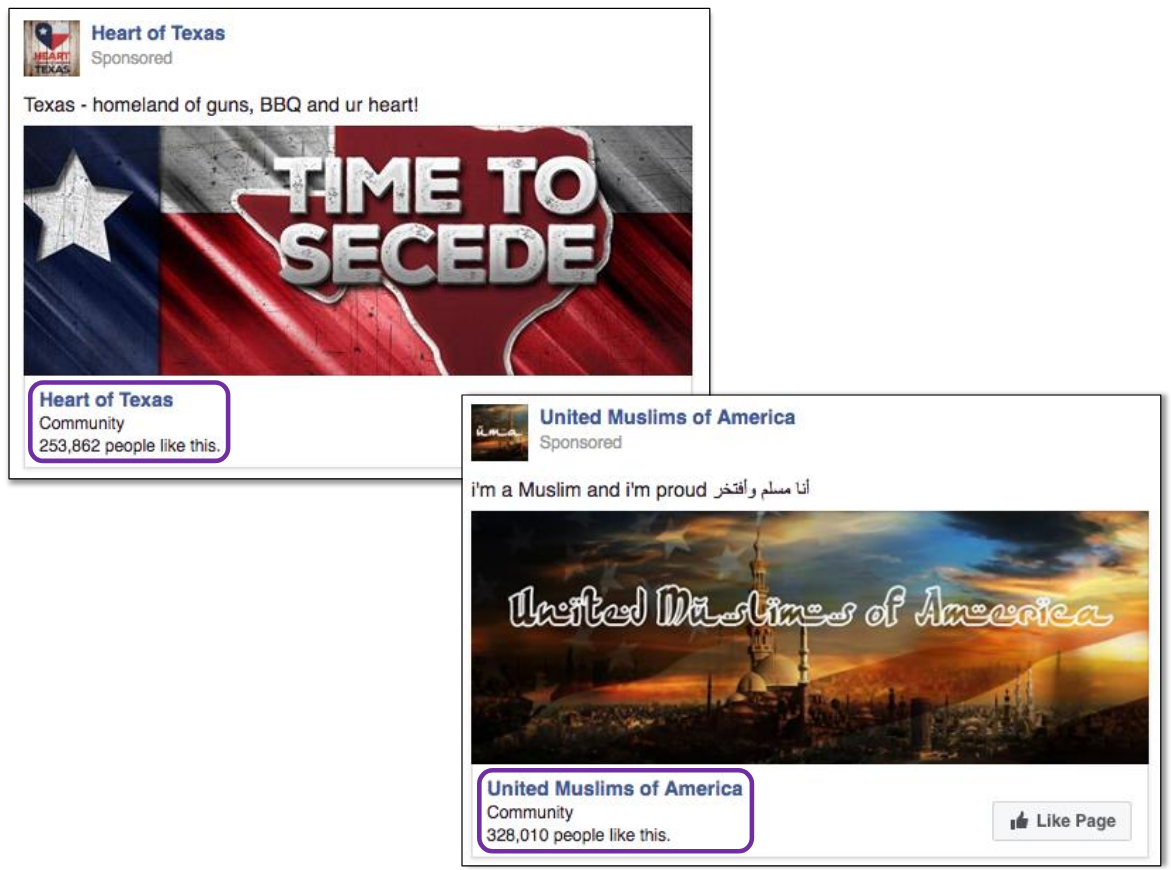 Last week’s hearings before US lawmakers has provided us with new insights into the workings of companies like Facebook, Google and Twitter, and how they have been subverted by Russia to further its political aims. In his opening remarks, the Vice Chairman of the Senate intelligence committee, Mark Warner, said that 120 Russian-backed pages on Facebook had built up a network of over 3.3 million people. From those pages, some 80,000 unpaid posts had reached an estimated 126 million people. He noted that researchers estimate that up to 15% of Twitter accounts – potentially 48 million of them – are fake or automated, and mentioned related problems with Google Search and YouTube.

However, the main focus was on Facebook, not least because the intelligence committee released a small sample of the ads that had been run on the social network, paid for by Russian accounts. The sophistication and targeting precision they demonstrate is remarkable. As the Wall Street Journal reported:

“Russian operatives targeted users on Facebook Inc. by race, religion and interests such as gun ownership, the Confederate flag and Ivanka Trump’s jewelry line, according to advertising data released by lawmakers Wednesday as part of congressional investigations into Russian manipulation on social media around the U.S. election.

The ads targeted groups on opposite sides of an issue, a move that lawmakers said was designed to amplify social divisions. One of the Russia-backed pages, “Back the Badge,” for example, ran an ad in October 2016 meant to reach the wives of police officers, sheriffs and pages memorializing killed officers that was seen more than 1.3 million times. “Woke Blacks,” on the other hand, promoted its page among people who are interested in “African-American culture” and the civil-rights movement. That ad was seen more than 750,000 times. Both pages were created by Russians tied to the Kremlin-linked Internet Research Agency, which paid for the ads in rubles.”

Earlier research had revealed that Facebook was willing and able to sell advertisers access to small groups with views such as “Hitler did nothing wrong.” The ads released by the Senate intelligence committee showed that Russian-backed organizations had exploited that fact in a highly effective fashion to reach people on Facebook with extreme messages that reinforced their prejudices and political leanings.

Warner is one of the three senators behind a proposed “Honest Ads Act“, which attempts to bring some transparency to the use of these ads. As Yochai Benkler explains in a post about the Bill, it seeks to do this in the following ways:

Those kind of measures are urgently needed, but they don’t even begin to address a far deeper problem that the Senate committee’s hearing underlines: the fact that Facebook is able to offer hyper-targeted ads because it is tracking everything that its users do on the site – and perhaps beyond.

This isn’t a new insight. Back in 2010, Eben Moglen, the law professor who helped craft several versions of the GNU GPL, described Facebook as free Web hosting with “spying free inside all the time.” More recently, the “techno-sociologist” Zeynep Tufekci explored the same idea in her widely-viewed TED talk “We’re building a dystopia just to make people click on ads“.

Announcing a 79% increase in its third quarter net income – to $4.7 billion – Facebook’s Chief Financial Officer said that the results were driven by “better targeting“. The growing evidence that Facebook ads may have had a significant impact on the result of the recent US election doesn’t seem to be worrying advertisers. On the contrary: they see it as further proof that Facebook’s model of “spying free inside all the time” works incredibly well. In fact, it works so well, they are worried that new EU legislation designed to protect online privacy might threaten that powerful tool. In a press release from the advertising industry’s European body, the Interactive Advertising Bureau, its CEO, Townsend Feehan, is quoted as saying:

“The European Parliament’s text on the ePrivacy Regulation would essentially expropriate advertising-funded businesses by banning them from restricting or refusing access to users who do not agree to the data collection underpinning data-driven advertising,” warned Townsend Feehan, CEO of IAB Europe.

“Data is the mechanism by which ads are delivered to users, the evidence that users see advertising, and how advertisers pay for it. Data-driven advertising isn’t an optional extra; it is online advertising,” explained Feehan. “Forcing businesses to grant access to ad-funded content or services even when users reject the proposed advertising value exchange, basically deprives ad-funded businesses of their fundamental rights to their own property. They would be forced to give something in return for nothing.”

That is, the advertising industry in Europe is saying it has a fundamental right to spy on the people who view its ads, and that it is inconceivable to show ads without tracking. It is this mindset that drives Facebook to gather as much information about its users as it can. The more detailed and intimate the data, the better the targeting, and the more it can charge for those who wish to advertise. When it unveiled its record third-quarter profits recently, Facebook boasted that the average price paid per ad had risen by 35% year-on-year, a huge jump.

As long as advertising remains the main way of funding online services, advertisers will naturally call for the ability to target audiences precisely, and to track in detail their response, both of which undermine users’ privacy. Perhaps the time has come to explore ways of financing digital activity directly, for example through a mix of subscriptions, micropayments, donations, and crowdfunding. The use of ad blockers on over half a billion devices around the world means that ads are in any case rapidly losing their effectiveness. The idea that people should pay for online services has been anathema for the last twenty years. But the seriousness of the threat posed by our current surveillance-based model – as revealed by the Russian exploitation of it during the US elections – may finally be the stimulus needed to start thinking the unthinkable.