Why we support the Index on Censorship: 2018 Freedom of Expression Awards 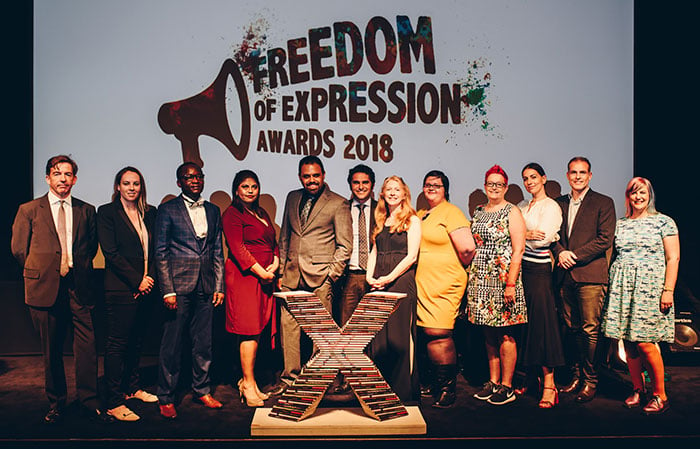 Freedom of Expression is a fundamental human right as enshrined in Article 19 of the Universal Declaration of Human Rights.

But it sadly comes as no surprise to any of us that there are governments and others wielding power around the globe who find numerous ways in which to obstruct freedom of expression. Be that by way of imposing high taxes on newsprint, making newspapers an expensive commodity that few can afford to buy, or forcing radio and TV stations off air should they dare to criticise government policy or by actively restricting the use of the Internet and new media.

People risk intimidation, detention and even their lives simply to exercise their right to seek, receive and impart information and ideas through any form of media and regardless of borders.

According to Mapping Media Freedom, a partnership between Index on Censorship, the European Centre for Press & Media Freedom and the European Federation of Journalists that monitors and maps media freedom violations across Europe, there were more than 4,100 identified cases of threats, violations and limitations faced by members of the press in the EU alone in the last year. This is Europe, this is the Western world and a continent often hailed for democracy. Imagine what this figure would be on a global scale?

Mapping Media Freedom is not the only way in which Index on Censorship works to campaign for Freedom of Expression. The organisation produces a quarterly magazine and has published distinguished writers from around the world since 1972, often publishing material that has been censored elsewhere in the world. Index on Censorship magazine has worked tirelessly to shed light on the many challenges that face free expression, from religious extremism and the rise of nationalism to Internet censorship.

I myself am an avid reader of the magazine and I consider myself to be a ‘Friend of Index,’ on both a personal and a professional level, and just the other week I had the extreme privilege of spending a couple of days with the Index on Censorship team, and others, to celebrate and recognise the crucial work undertaken by this year’s Freedom of Expression Awards fellows.

Index on Censorship has been celebrating the courage and creativity of some of the world’s greatest journalists, artists, campaigners and digital activists through the Freedom of Expression Awards since the awards were first presented in 2001.

Over the years, the Freedom of Expression Awards have been presented to a number of courageous journalists, artists, campaigners and activists from around the world, all of whom have made significant contributions to free expression.

For the last two years, Private Internet Access has sponsored the Freedom of Expression Awards in the Digital Activism category. This year, myself and Rick travelled to London to deliver training to the fellows before the award ceremony, and it was an extremely humbling experience to learn about their campaigning, their work, and the risks and challenges they face.

The 2018 Freedom of Expression Award for Journalism was won by Honduran investigative journalist Wendy Funes, an inspiring powerhouse of a reporter who regularly risks her own life to report on what is happening in her country. In spite of fellow journalists having met violent deaths in recent years, Wendy continues to report on corruption, violence against women and many other brave topics.

The 2018 Award for Campaigning was won by the Egyptian Commission for Rights and Freedoms, a brave organisation that continues to work tirelessly in spite of the country having orchestrated a hostile campaign against independent civil society groups. The ECRF provides advocacy, legal support and campaign coordination, drawing attention to the many ongoing human rights abuses taking place under the autocratic rule of President Abdel Fattah-el-Sisi.

I had the privilege of taking to the stage with Dr Sue Black to present the 2018 Digital Activism award to this year’s winner; Habari RDC. A collective of over 100 young Congolese bloggers and digital activists, who use Facebook, Twitter and YouTube to give young people across the Democratic Republic of Congo a voice. Habari RDC posts stories and cartoons about politics, but also covers football, the arts and subjects such as domestic violence, child exploitation, the female orgasm and sexual harassment at work.

The 2018 Freedom of Expression Award for Arts was won by the Museum of Dissidence, a public art project and website that celebrates dissidence in Cuba. The Museum of Dissidence organises radical public art projects and installations, concentrated in the poorer districts of Havana. They continue to challenge Cuba’s restrictions on expression in spite of arrests, threats of prison and other strong repercussions.

On behalf of the entire team here at Private Internet Access, I would like to congratulate this year’s winners, and encourage each and every one of the fellows to make the most of the support provided by the Index and partners during their fellowship year. I would also like to urge the fellows to continue campaigning, continue writing and continue fighting back, not only because the status quo must be challenged but also because people like you provide such incredible inspiration for those who will follow. I am honoured to have spent time with you all in recent weeks, and I thoroughly look forward to following and supporting your work as your fellowship year continues.