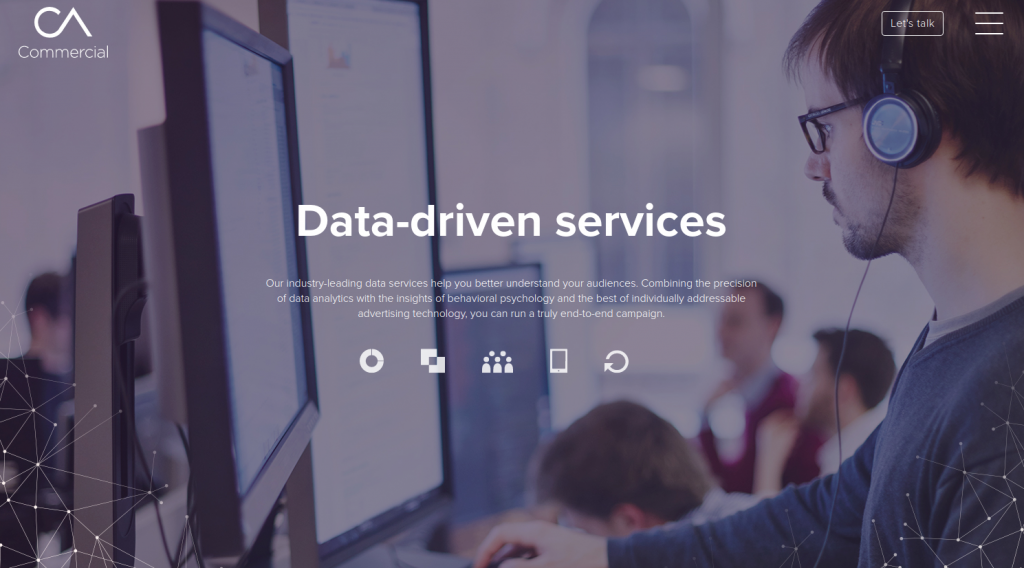 Last month we wrote about Cambridge Analytica, and how its micro-targeting may have had a significant influence on the US election and Brexit. A new article in Fast Company reveals that the firm is extending its services to the world of TV:

“Since last year’s presidential campaigns, the company has sought to expand further into targeted, or addressable, TV, an emerging type of data-driven ad technology that marketers and political campaigns can use to know not just what key audiences and voters like on TV and in other media, but also to determine what particular messages to show them and when.”

Addressable TV employs the same techniques that allowed Cambridge Analytica to target Facebook users with pinpoint precision. A company analyzes viewer data gathered from digital set-top boxes to build up a detailed profile of each household. It can then combine that information with data that it buys from other sources about people living at the address where the set-top box is located. Putting this all together, data analysis companies try to work out what kind of ads will work best for each household. Because the TV transmission is based on set-top boxes, it is then possible to send tailored ads to single households – what is called “one-to-one” advertising in the industry – rather than to everyone watching a broadcast, as in traditional TV advertising.

Cambridge Analytica’s “brand-focused” unit, called CA Commercial, has just launched its own TV targeting product, SelecTV, available in the US and UK, with additional countries following in due course. Although Cambridge Analytica is one of the best-known companies operating in the new field, it is by no means alone. A 53-page “Guide to Precise TV Targeting” from the Video Advertising Bureau, published last November, provides fascinating insights into this emerging market. It defines “addressable TV” as “a means of delivering the right ad to the right person by combining the unmatched reach of television with the targeting precision and measurement capabilities of ‘one-to-one’ marketing”. As of last year, some 50 million US households could be sent personalized TV ads, with the advertising market expected to reach $2 billion by the end of 2018.

Addressable TV represents a major shift from traditional TV advertising, bringing as it does the kind of extreme customisation that Facebook has been offering for a while. But things don’t stop there. Beyond addressable TV advertising lies “cross-screen” addressable advertising. As its name implies, the idea here is to show ads not just on the TV screen, but on mobile, tablets and computers as well. It offers advertisers the possibility of sending targeted ads to people that follow them in a coordinated fashion from screen to screen, perhaps changing subtly as they do. Cambridge Analytica is already starting to work in the mobile phone market. In June, it announced a deal with the Mexican company Pig.gi:

Cambridge Analytica will provide data-driven marketing services to Pig.gi in order to transform the way that brands advertise their products on the app.”

Cambridge Analytica says that it “will assist Pig.gi with data management and analysis, including behavioral science, allowing brands to understand and connect personally with consumers and users to receive advertising that is most relevant to them.” In other words, Cambridge Analytica will be applying its usual techniques in order to create psychological profiles for mobile phones users of Pig.gi, enabling targeted ads to be sent based on those profiles. To do that, it draws on the comprehensive set of permissions that the Pig.gi app requires, which allows it to monitor everything that the mobile phone user does on the device.

This exposes the key privacy problem with addressable TV and cross-screen addressable ads. They require the collection of as much personal data as possible in order to build up a complete profile that can be used to select the most suitable targeted ads on a one-to-one basis. Such pinpoint targeting is arguably a boon in some respects, since it means that people avoid being bombarded with marketing material that is inappropriate. But it does have some serious downsides.

Companies not only seek to record all our likes, hopes and fears. Anything they can’t capture they can probably infer by drawing on their psychometric databases that allow people to be assigned to various personality types. That, in itself, is hugely problematic from a privacy viewpoint. But when access to particular kinds of individuals, and deep knowledge about them, is sold with the explicit aim of persuading them to do something – perhaps to buy goods, or maybe to vote for someone – things become much more troubling.

As a recent Privacy Internet News explored in the context of Facebook ads paid for by Russian-linked organizations, the issue here is transparency. When ad campaigns run on what might be called public platforms like traditional television, it is fairly evident who is doing what. When one-to-one ads are sent to just a few people, there are few outward signs of the activity. That makes it very hard to detect if something dubious is going on, to counter it, or to block it.

If, as seems likely, addressable advertising becomes the norm, we need to draw up transparency rules that allow the public to see what is being sent to an individual, and how they were chosen, even if the personal details of course remain secret. The tighter the targeting, the harder that will be, since the number of people that meet the criteria for addressable ads may be so small that it will be obvious who they are. Tackling that tension between privacy and transparency won’t be easy, but it is an increasingly urgent task.