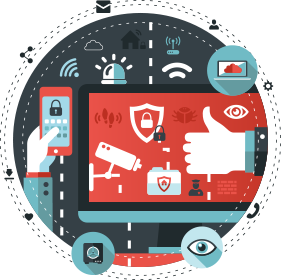 Private Internet Access uses the open source, industry standard OpenVPN to provide you with a secure VPN tunnel by default. OpenVPN has many options when it comes to encryption. Our users are able to choose what level of encryption they want on their VPN sessions. We try to pick the most reasonable defaults and we recommend most people stick with them. That said, we like to inform our users and give them the freedom to make their own choices. Private Internet Access users can also opt to use WireGuard® for their VPN tunnels.

All Speed No Safety

Advanced Encryption Standard (128-bit) in CBC mode.
This is the fastest encryption mode.

No Authentication. None of your encrypted data will be authenticated. An active attacker could potentially modify or decrypt your data. This would not give any opportunities to a passive attacker.

This is the encryption used to establish a secure connection and verify you are really talking to a Private Internet Access VPN server and not being tricked into connecting to an attacker's server. We use TLS v1.2 to establish this connection. All our certificates use SHA512 for signing.

Ephemeral Elliptic Curve DH key exchange and an ECDSA certificate for verification that the key exchange really happened with a Private Internet Access server. Curve secp256k1 (256-bit) is used for both. This is the same curve that Bitcoin uses to sign its transactions.

We display a warning in 3 cases:

The recent NSA revelations have raised concerns that certain or possibly all Elliptic Curves endorsed by US standards bodies may have backdoors allowing the NSA to more easily crack them. There is no proof of this for curves used with signing and key exchange† and there are experts who think this to be unlikely. We therefore give users the option but display a warning anytime you select an Elliptic Curve setting. We also included the less standard curve secp256k1, which is what Bitcoin uses, was generated by Certicom (a Canadian company) instead of NIST (as the other curves were), and seems to have less places to hide a backdoor.
† There is strong evidence that a random number generator which uses ECC was backdoored but it was not widely used.

An active attack is one where an attacker gets "between" you and the VPN server, in a position where they can modify or inject data into your VPN session. OpenVPN was designed to be secure against active attackers as long as you are using both data encryption and data authentication.

A passive attack is one where an attacker simply records all data passing over the network but does not modify or inject any new data. An example of a passive attacker is an entity that performs the dragnet capture and storage of all network traffic but does not interfere with or modify it. As long as you are using data encryption your OpenVPN session is secure against passive attackers.

Ephemeral keys are encryption keys which are generated randomly and only used for a certain amount of time, after which they are discarded and securely erased. An ephemeral key exchange is the process by which these keys are created and exchanged. Diffie-Hellman is an algorithm used to perform this exchange. The idea behind ephemeral keys is that once you are done using them and they are thrown away, no one will ever be able to decrypt the data which they were used to encrypt, even if they eventually got full access to all the encrypted data and to both the client and the server.